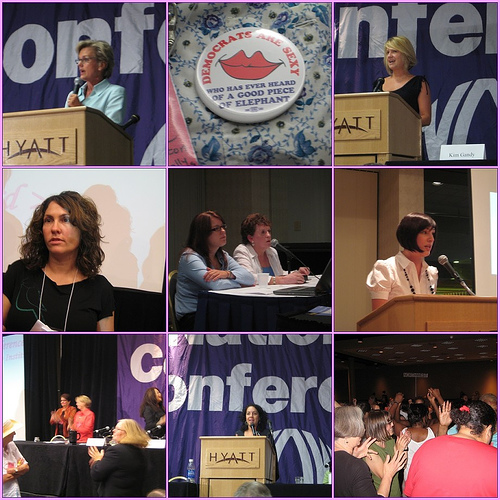 Reposted from my old blog:

I'm all registered & now working the reg area. "My name is Roni, how may I help you?"

If only she was born in the states. *sigh*

SATURDAY:::
11:45 AM - Chenese Lewis
She's a plus-size model who feels each photo shot is a statement. Once @ a 'Insider' segment her & other plus-size women actors were weighed(!) on camera. The scales were RIGGED to add 30 lbs. She wasn't too fazed but the other actors were devistated. She works a non-NOW affiliated 'Love Your Body' project.

OMG, I love this woman.

Did you know that Sherri AND both her kids (6 & 3) are lifetime members of NOW? She was introduced to NOW when the actor playing her mom on a soap opera took her to a NYC NOW meeting. Sherry also spoke about being a feminist & an actor in Hollywood. Hint: it's not an easy thing for up & coming actors.She assures us that there are many feminists in Hollywood & she needs our help. 1) No more guilty-pleasure reading of People Magazine, etc;2) Express ourselves creatively as feminists. Turn off stupid TV. Go to museums. Support PBS. Write to the networks;3) Write to the stations. The ads are focused TO US! We can make a difference;One more thing...She's a lefty & of course means as a kid she kicked ass on the ball field. A lefty pitcher is quite the assest for any team.Add Sherry to my crush list please.

She's a Hollywood writer & active with Hollywood NOW. She describes a recent table reading with a wannabe* actress who bombed in front of the film powers that be. Jill is too funny! She wouldn't see 'The Departed' because there was only 1 woman in the cast.

The funniest part of her address was when she remarked that, "My sister is a lesbian. LUCKY! I was just a chromosome away!" Everyone lost it.

She also told us all of an action that Hollywood NOW did to remove disgusting billboards for a certain horror flick that opened on Friday. She cried while recounting how hard it was to work on it and then see the billboards back up a few weeks later.

Dear goddess, my crush list is growing by the minute. 'Thank you!'**

* The unnamed woman is on a TV show, but shouldn't be called an actress. Those of you who want to know need to buy me a mocha, martini or garlic mayo cheese fries.

** I'm moblogging & my thumbs hurt, so you'll have to wait for an explanation.

A powerful & inspiring speaker. Yes, Dr. we won't go back.

The last plenary started with a dance party. We hammed it up even more because CNN & CSPAN are in the house.Angie Cruz is a writer from NYC. It took a long time before she decided to be a writer due to a lack of any women writer role models much less WOC writers.She also spoke about how hard it was to be a progressive writer after 9/11. She is just finally getting that energy again to make change happen.Yup...I want her to be my BFF. A grrl can't have too many BFFs right?

Sometimes the best, sometimes not, part of the conference. I'll post a link when the passed resolutions are on the NOW website.Then it's time to head home! And I decided to hitch a ride home with friends. I booked a flight way too late in the day. Yeah for Southwest cancellation rules.
Labels: feminism NOW oldblog