The Politics of Motherhood 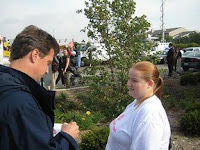 Yesterday was an amazing day.

I was witness to the opening of a new Planned Parenthood clinic in Aurora. It wasn't so much that the clinic opened despite the desperate grasping of straws by the anti-choice community (they still are with two lawsuits that have no merit, in my eyes). It was the number of moms who showed up with their children.

The woman in the photo is a mom who brought her 5 1/2 year old daughter to the clinic. She explained it to her by saying that they were going to a party...with yelling. She's talking to a reporter about why she came out and why she brought her daughter. Bottomline, we were there for the same reason. We want to ensure a future where our daughters will have full control over their reproductive choices. Have a baby? Not have a baby? Wait? They will answer those questions. As the chant goes, not the church and not the state, they will decide their fate.

It's not even just about abortion for me thou. It's about our society recognizing that women's reproductive health is important. From birth control prices skyrocketing on college campuses to insurance companies labeling one woman's (doubt she's the only one!) miscarriage (aka spontaneous abortion) as an elective abortion and refusing to cover it. Can you even IMAGINE having a miscarriage and then your insurance company telling you that you had an abortion? At midnight? In the ER? F*** that!

This inability to take women's reproductive health care seriously bleeds into our birthing options. C-sections are on the rise and not just because we are too posh to push. Some insurance companies will push for a C-section in light of high malpractice rates/stats for certain patients. Then if you do have a C-section, deciding that you want to have a VBAC may be out of your hands.

All of this has to stop. My uterus, your uterus, and our daughters' deserve it.