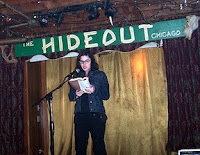 You knew that the 'ladies' of Bitch magazine would have something to say about the McCain "how do we beat the bitch?" fiasco. JFTR - I love Bitch magazine. When I say I love it, I freakin' mean it. Last year I organized a benefit at the Hideout where I took this picture of Andi Zeisler.

Andi brings it when discussing the b-word in the WaPo, what it means to use it, who can use it, and all the good stuff:

So let's not be disingenuous. Is it a bad word? Of course it is. As a culture, we've done everything possible to make sure of that, starting with a constantly perpetuated mindset that deems powerful women to be scary, angry and, of course, unfeminine -- and sees uncompromising speech by women as anathema to a tidy, well-run world.

It's for just these reasons that when Lisa Jervis and I started the magazine in 1996, no other title was even up for consideration.

Once again, Lisa & Andi, thank you for creating Bitch.

In fact, we hoped that we could reclaim it for mouthy, smart women in much the way that "queer" had been repurposed by gay radicals. As Lisa wrote in the magazine's mission statement, "If being an outspoken woman means being a bitch, we'll take that as a compliment, thanks." I'm guessing that Hillary Clinton, though probably not a reader of our magazine, has a somewhat similar stance on the word. After all, people who don't like Clinton have been throwing the slur at her since at least 1991.

I know that many people, especially women, don't like this reclaiming thing. And it's not just a generational thing either. I've met my fair share of 20-year-olds who don't like the word in any context. But considering how it has been used to demean women with their own minds, I can't help but want to reclaim it and take that power away from it. Sadly thou, the power remains.

When these people call Clinton (or House Speaker Nancy Pelosi, or Sen. Dianne Feinstein or former vice presidential candidate Geraldine Ferraro) a bitch, or even the cutesier "rhymes-with-witch," it's an expression of pure sexism -- a hope that they can shut up not only one woman but every woman who dares to be assertive. Simply put: If you don't like Clinton's stance on, say, health care or Iraq, there are plenty of ways to say so without invoking her gender.

Thank you! I know it's hard...I find it difficult to find the correct word when I'm pissed at a woman in my life. I want to call her a bitch, but considering that I'm reclaiming that word for myself, I can't really do it, now can I? Asshole is gender neutral, isn't it?

My own definition of the term being what it is, I can confidently say that I want my next president to be a bitch, and that goes for men and women. Outspoken? Check. Commanding? Indeed. Unworried about pleasing everybody? Sure. Won't bow to pressure to be "nice"? You bet.

And guess what? I'm not even sure that person is Hillary Clinton.

I'm not sure if any politician won't bow to pressure to be nice, but I'm really starting to feel like Katha Pollitt. I feel like since rumors started that she was going to run for President I've had to defend her to almost every person in my life and it's not just her policy moves either! Now, I'm still undecided about who to vote for in the primary, but seriously folks, if all I read from here until election day is sexist crap about Hillary, I'm checking that box with her name on it!

Leonard Pitts also has some choice words to say about the word bitch and us as a society. Tell it brother!

I get that many people don't like Clinton. I don't like her much myself, and my reasons echo the consensus. She seems cold, calculated, brittle.

Here's the thing, though. I find that I can't name a single female national political figure I do like -- not respect, not agree with, but "like." Oh, I can name you many men who, their politics aside, strike me as likable: McCain, Bill Clinton, John Edwards, even cranky old Bob Dole.

But women? Not so much. Nancy Pelosi, Janet Reno, Condoleezza Rice, Madeleine Albright.... I cannot see myself -- we are speaking metaphorically here -- cuddling up to any of them. They all seem formidable, off-putting, cold.

Which suggests the problem here is not so much them as me. And, if I may be so bold, we. As in, we seem unable to synthesize the idea that a woman can be smart, businesslike, demanding, capable, in charge and yet also warm.

I dunno about Pitts, but I loved Janet Reno. Yes, despite her flaws. Maybe it was my love for Will Ferrell that oozed onto our dance party Attorney General, but still, I liked how she seemed not to take shit from anyone and drove a pick-up truck. There have been times when I have loved Hillary, but then she went and lobbied for a policy that the inner feminist in her was screaming, "NOOOO!!!" at.

And BTW - I think Hillary should start selling t-shirts that say, "That's Ms. Bitch!" Or copyright, "The Bitch," and please note the capital letters. She's running for President, Senator McCain, is a Senator herself, and if people keep using it on her, let's just make it her unofficial title. Hmmm...since GWB has the Western White House can Hillary end up with a seal that says, "Bitch in Chief?"

Point of privilege...If you don't subscribe to Bitch, what are you waiting for?