Weather report - It looks cold out there, but so far no snow or rain, but everyone is warning that it will be bad later today. Hopefully it'll all happen while we're in the hotel.

So last night...it was great! The woman, er, young woman who runs the trainings is only 26. Ok, so that didn't do too much for my ego, but hey, she's doing an awesome job. She told us a little bit about who is here and we range in age from 17 to 66 years old. Seventeen!? OK, now I really feel like a slacker. But gotta say, if this had existed when I was 17, I'd be here too. We have teachers, students (my roomie is a freshman at Alverno), engineers, homemakers, crossing guards, lawyers, and activists. 25% of us don't affiliate with any major party. We have one sister-sister team and one mother-daughter team (I met them in the elevator and was wistful. My mom was PTA president...sigh).

The White Project is in Wisconsin thanks to some grants they received to work in Wisconsin. Thus a lot of the information we'll receive this weekend is based on Wisconsin data. I have no problem with that mostly because with the urban sprawl we have in Chicago, Milwaukee is just about a suburb of Chicago. That means, at least for me, what happens in Milwaukee is just as important as what happens in Naperville, Joliet, or NW Indiana.

We did learn that President Barbie will be running again in 2008. Later in the evening Marie Wilson did say that Mattel says her feet can't be fixed, but did note that by 2004 the box said "Doll needs support" instead of "Doll can not stand alone."

There was a great inspirational address by WI Representative Tamara Grisby and a really honest panel with four amazing women. Breakfast is in 10 minutes and I need to pack up, so I'll blog about that later.

Until then, enjoy some photos:

Planned Parenthood of Milwaukee was present. They had some great books on talking to kids about sex. There was even a book that was dubbed the "Our Bodies Ourselves for preteen girls." I gotta find that one! 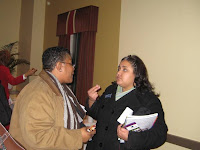 The Latina in the photo is running for office. She's running against a long time incumbent. I wished her lots of luck. 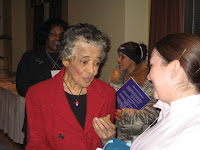