How many feminists does it take to pick 6 books? 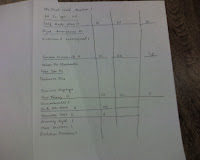 A: It's not how many feminists, but how many rounds of voting it takes!

To the left is a photo of the voting rounds from the Women & Children First Intergenerational Feminist Book Club. We meet twice a year to choose books and it's always a riot. Monday we had just five people and about 17 books up for vote.

The first round we each got 6 votes, that eliminated a few books, but then we needed another round and another...Eventually we picked all six books in 4 rounds. The funny thing is that it took so long to whittle the list down to 6 because so many of us liked the same books, but just not enough to have a clean first vote. 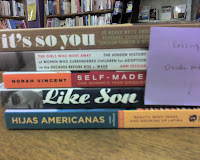 There are the books that made the cut. We didn't have a copy of "The Golden Notebook" so we used a sticky note as a stand in. Who says feminists don't have sense of humor.

"It's So You" is the selection for March. We figured that after this insanely frigid winter we needed to think about fashion again.

April is "The Golden Notebook" which broke our cardinal rule - the person who recommends the book HAD to have read it already. We didn't always have this rule and have had disastrous results.

August is "The Girls Who Went Away" which I have read and cry just thinking about. A must read.

Chicago readers...Please stop by and join bookclub! It's super fun. We discuss not just the book, but the issues that pop up from the book. And sometimes we grab a beer afterwards.