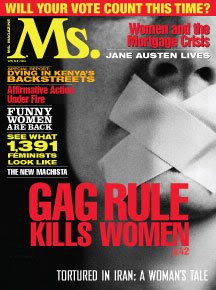 I've often joked that I'm in the wrong line of work. As an educated Latina from a working poor background who intellectually "gets" her oppositions stances, I really should have sold out years ago to become a right-wing pundit. In the legacy of Phyllis Schafly and every Latina who speaks in favor of the Minute Men (we have one in the Chicago area), I would be a star and I assume fairly rich by now. The current issue of Ms. Magazine profiles the identity sell-out we should all be educated on - Ward Connerly.

Who is Ward Connerly? If you don't know his name, you know his work. He ended affirmative action in California, Washington, and most recently Michigan. He did it with a smile, lies, damn lies. Wrapped in the blanket of equal rights, he peddles voter initiatives across the country, from state to state, like a Johnny Appleseed planting scapegoats as he goes. A successful African-American man, Connerly began his crusade to end affirmative action with the backing of some much more successful and wealthier white men from the construction business. Yes, the war against affirmative action began because white-owned construction businesses didn't feel they were getting enough contracts and/or were upset that they couldn't give all their business to their buddies and HAD to seek out a woman- or minority-owned business.

Ms. crack researchers give us some great stats on what happened in California before and after Prop 209 passed in government construction contracts:

Let's get one thing straight - Connerly's mission is not about fairness, but greed. Pure and simple.

This November's election is not just monumental in the fact that we could elect the first Black man or white woman to the Presidency, but in five states anti-affirmative action initiatives are on ballots. Dubbed "Super Tuesday for Equal Rights", November 4th may bring an end to affirmative action in Missouri, Colorado, Arizona, Nebraska & Oklahoma.

I've been lucky enough to hear presentations from various groups, especially a group of researchers in Michigan, who did a lot of great work to oppose other anti-affirmative action initiatives. Some have failed, some have won, and some are just getting ready for their local fights. The key factor to winning these stealth attacks - and they really are stealthy, not just stupid/ignorant people are falling for Connerly's deceptive language - is the white woman's vote.

"In Michigan...an exit poll showed that 59 percent of white women voted for the CRI, while 82 percent of women of color voted against it."

Are white women tired of people of color getting into college? Winning government contracts? IMO, they aren't. They were duped. And from one presentation I saw in the last year, I believe that white women didn't even turn out to vote that election.

I've heard a few people, who know what they are talking about, say that Connerly can't come to Illinois. Why? Our ballot initiatives are non-binding. Whether or not Connerly can set up shop in Illinois or not, I do urge you to head over to your local (hopefully independent) book store and pick up a copy of the winter issue of Ms. magazine. There's a whole lot more in the issue than just Connerly, but I'll get to that in another post.