Bitches know how to party 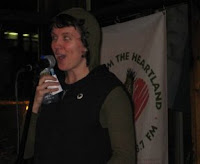 Last night I was honored to have coordinated a benefit for Bitch Magazine at the Heartland Cafe in Rogers Park. While the event did not go off without a hitch, I think we all still had a great time & money was raised for the best feminist magazine (sorry, Ms.). The best part was finally meeting Bitch publisher Debbie Rasmussen. Isn't she cute like in that sassy pixie way? 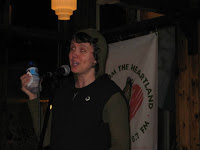 We had a great chat while the band set up, heard a bit about the Bitch move to Portland, Oregon, and got some insight into how the magazine hopes to move in the future. Debbie's on her way around the Midwest for a string of Bitch benefits and Feminism In/Action discussions where I think you'll also get a glimpse of what may be in store for Bitch. So if you can, get to one! Unfortunately I was only able to set up the benefit. 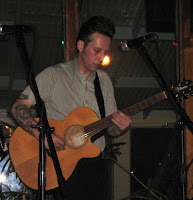 Debbie lined up a great band for the evening - The BELMONDOS.

Seriously, how can you beat a band that has an accordion, bass, AND banjo?

Their music was perfect for an evening at the Heartland. They were also great sports for dealing with the technical difficulties that resulted in about a 20 minute intermission. It was all my bad.

More photos of the BELMONDOS!

Even people who weren't at the benefit came over to listen to them and inquire about a CD. Their next show is at the Abbey tomorrow night. 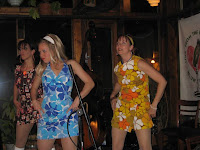 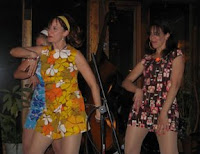 I invited the Revelettes to dance up a go-go storm. This is the second Bitch benefit that they have performed at and why yes, I coordinated the other one as well. I love seeing them because they are just too funny in how much they get into the go-go dancing. It's awesome! It's cheesy! It's to be seen.

We also had an intuitive do readings. I won't say what she told me, but it really made me think. Thanks to Early to Bed, Weener Ware, and Poise.cc for their goodies for the raffle.

And now I'm hitting bed cause I'm an old married mom who can't handle being out until 11:30 pm on a school night anymore.