The Boys' Crisis is BUNK 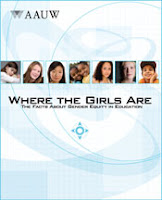 The AAUW released a new report today detailing education trends between girls and boys for the past 35 years. And you know what? BOTH are succeeding...BOTH are going to college. Despite cries of terror from certain circles fueled by the media, boys are NOT being left behind.

The NY Times covered the report (and astonishingly NOT in the style section!):


As the good feminist/blogger/science nrrd I am, I read the entire report today and here are some highlights that I don't believe are in the executive summary, but you should know:

And I will leave you with that last statistic. Men and women are going to college in record numbers. Oh...and all the lines above can be found in the report with their appropriate citations.

What the AAUW is trying to tell us all, once and for all, is that education is not a zero-sum game. Yale and Harvard might be, but education itself is not.