Mexicana Ochoa is hotter than Tiger, but getting none of the buzz 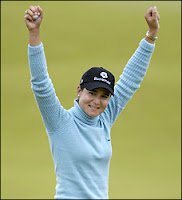 See that victorious smile? That belongs to Lorena Ochoa and she's totally kicking ass on the Ladie's PGA tour. Let's forget that it's called "Ladies" for a moment and focus on the news that Christine Brennan* tells us:

Ochoa, whose English is quite strong considering she was born in Guadalajara, Mexico, and only came to the United States in 2000 to play golf at the University of Arizona, is the winningest golfer in the world in 2008, and the best-kept secret in all of sports. Tiger Woods' bum knee has received far more attention than all of Ochoa, even though Woods is out, while Ochoa has won four LPGA tournaments in a row and five of the six events she has played this season.

She has won the tour's last two majors, the British Open last year and the Kraft Nabisco Championship this year, and is the only golfer with a realistic chance at the Grand Slam this year. (Trevor Immelman? Please.)

Yes, if anyone is going to win a Grand Slam in golf this year, it's Ochoa, not Woods. Who possibly would have anticipated this development, especially with the Woods-friendly Masters always first up for the men?

Certainly not Tiger. He was so preoccupied with the Grand Slam that he looked ahead to it on his website coming into this season.

"I think it's easily within reason," he wrote.

Yes, but for Ochoa now, not him.

Now friends know that I don't consider golf a real sport, but I'll overlook that for now. But just days after Brennan's column went up, TIME magazine named Ochoa one of the 100 most influential people. Her profile was written by Nancy Lopez, the greatest woman golfer ever AND fellow Latina. Perhaps this inclusion will mean that we just might see more of Ochoa on the sports pages and during the evening news sports section.


* When I grow up, I'd really like to be a cross between Christine & Carol Slezak. Both sassy sports columnists who can tackle the Cubs-Cards series and Title IX issues with one arm tied behind their back.