When asked about women who are still holding out full on support for Senator Obama, this is what my former US Congressman said:

...most of them always stay out of national politics and that the party is generally unified around Obama.

"They're just going to stick to their knitting," he said. "It's not that they're anti-Obama."From the AP (sorry boycotters, that's the only place I could find the quote.)

Apparently this is what he thinks about when he ponders women voters.

Instead I'd like to let him know that many of us are both voters and knitters, but we do not stay out of national politics.

Of course, PunditMom might correct me on that last statement as she blogged about how women don't give to campaigns and that's all that party guys seem to care about - money. She's urging all of us to take $27 out of our budget (a few Starbucks, a new bag at Target, a new shirt from the sale rack at Ann Taylor Loft...) and send it to a campaign. She suggests any campaign. Part of me wants to tell you to send it to the DNC...with a knitting needle through the check. Yes, you can find small enough needles for that trick. But then we're kinda rewarding them aren't we? 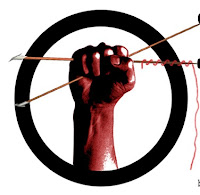 So I'm not sure what we can do. I know we're not going to vote Rahm out of office. He's there to stay. BUT...he is on the rumored list of people to replace Obama once Obama kicks McCain's ass. I don't think that would happen since Rahm seems to have plenty of power in the House. Plus GRod has enough problems on his hands and I don't think would want to add to his list by replacing a black man with a white man...rather I see a person of color or a woman as our new junior senator...but that's a bit later.