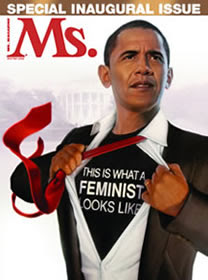 And of course I mean the Ms. magazine cover with President Obama on it.

I had the privilege of interviewing Ms. Executive Editor Katherine Spillar this morning about the controversy and thought behind the Obama cover. You can read Eleanor Smeal's rationale for the cover online and in the issue, but I wanted to dig a bit deeper.

Of course the morning had already started on a bit of Obama news that leaked out late the night before about the President asking that family planning money come out of the economic stimulus package. Long time readers may recall that my stance on reproductive justice keeps evolving more and more to be centered on economic justice. A woman can't afford her birth control method without economic justice and thus can't plan her pregnancies to allow for economic justice. Essentially, many college women can't get thru college in 4 years without a little help from the birth control pill. I know it helped me! Thus I couldn't understand why a man who claims to be a feminist would actively throw women under the bus like this.

I asked Spillar if she thought, with and without the recent news, if Obama had gotten off to a good start or had cemented his feminist credentials with the amazing first week of his administration. Spillar commented that it was a good start, but reminded me that in Smeal's letter, Ms. warns that we must remain vigilant as we have a strong and large opposition. This time it is not the White House but rather organizations like the Chamber of Commerce who is opposed to paid sick days and paid family leave. We must remember we have a friend in the White House who went up to Smeal in 2007 in DC and offered up, "You know, I'm a feminist too." I find it curious that he will offer this up, but Michelle wavers...but that's another post.

Spillar and I discussed how we, feminists, can keep from feeling betrayed again. Of course, that conversation happened about 24 hours too late, because many of us felt betrayed by the family planning deal. BUT...Spillar says Ms. and Feminist Majority is not happy about what happened with the family planning deal either. They worked hard to keep it in, but we will be disappointed many times during this administration.

But why the cover? Spillar said that they wanted to try to capture the emotions and mood of the country. That while we, as feminists, may not want to believe in the superhero rescue storyline, many others in this country are in fact hoping that he saves us from two wars, the economic crisis and our horrible image abroad. It was played up on a comment Obama made at a luncheon about not being born in a manger, but rather on Krypton. She admits that the cover was also intended to grab people's attention. Spillar points out that the issue holds many important stories on how we can and must regain ground after 8 years of the Bush administration. I'm going refrain from content review in this post to focus on the controversy.

I asked Spillar if by putting Obama on the cover of Ms. that Ms. was saying that he met their feminist litmus test. She responded with a resounding YES.

I then asked her if they considered Michelle for the cover instead, given that she's a woman and that many women are not satisfied with how the big feminist orgs have come (or not) to her defense since Hillary's candidacy ended. Spillar replied that Feminist Majority had come to her defense, especially after the Baby Mama incident. While they may still put the First Lady on the cover, Ms. wanted to mark the historic moment and the hopes we have of the President.

Now for the illustrator himself...I wanted to know why the leading feminist magazine would turn to a man for their cover. Spillar was unapologetic with her support of the man who did the artwork. She felt his work best represented how they wanted to portray the President. I joked that we could call this issue the Men issue of Ms. As Spillar said, Ms. is an all-woman run magazine and decided to give a man an opportunity.

We discussed the high standard feminists have for Ms. That they are often looked to as a standard bearer and if they welcomed that burden. Spillar said that they proudly carry that burden.

She also mentioned that one-third of men in the USA self-identify as feminists and Obama is one of them. Yes, we will have disappointments, but we are at a point where we, as feminists especially, have an opportunity to move the country forward. We must seize this moment.

This reminds me that sometime over the summer my family & I hit the Maxwell Street Market for something my husband was looking for. It's usually a trip where we buy small things for cheap, grab some freshly made Mexican food and just have a nice time. That time I was floored at how many Obama things were out. Obama shirts, hats, caps, if you could put his name or face on it, it was there. I turned to my husband and said, "Obama is MONEY!" And he is. He's on almost every magazine out there. I'm still waiting for him to be in the hidden pictures section of Highlights.

The placement of Obama on the cover of Ms. was both calculated to grab our attention and to mark this moment in history. Ms. still does not take corporate advertising, thus needs readers to pick up and buy an issue or subscribe to continue to cover many of the issues we care about. Do I blame them for jumping on the Obama money wagon? No. It's pretty darn smart and I'm happy they are open about it.

Two summers ago I was standing in a buffet line at a conference with my boss who LOVES Obama. She lives in Hyde Park and has hosted fund raisers for him in the past. We were standing next to Eleanor Smeal. I said hi to Ellie, as she is often called, and introduced my boss. When Ellie found out that we were from Chicago, she asked us which Chicagoan we were backing - The native Chicagoan who now lives in NY or the adopted Chicagoan. I got to listen in on a die-hard Hillary supporter (Ellie) debate a die-hard Obama supporter. It was FREAKING BRILLIANT. It was like watching a Navratilova-Evert tennis match. Ellie lives and dies feminism...I may not always agree with everything she says or does, but I know for a fact that Ellie isn't a sell-out. So...to see Obama on the cover of Ms. was kinda like a peace offering from one of Hillary's most ardent supporters and a nudge to all of us to recognize that yes we do have a feminist First Family.

We do have a lot of work to do and this is politics. Deals are made and far too often women, especially poor women & women of color are left out in those deals. We have to stay strong, vigilant and united. He's going to screw up. Hillary would have screwed us a few times too. Remember her stance on welfare peeps.

And honestly, I do hope that Obama saves us...By inspiring & showing us that we can work together, as a community, to clean out the shit that's been piling up for the past eight years. We need to move forward, but we can't get there without each other.
Labels: feminism magazine politics