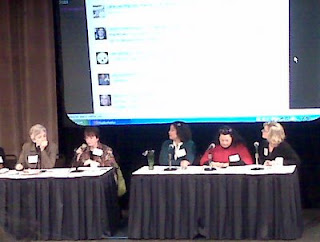 Yeah, there I am in the blue sitting between Kim Gandy & Elisa Camahort. I've known Kim for almost 6 years now, but it still is a bit mouth-dropping that I get to sit next to her at lunch, so sitting next to her on a panel was overwhelming. At the same time I was there to do a job and I wanted to do it. The idea was to talk about where feminism has been and where we can go. After Kim & Eleanor Smeal talked about the fact that NOW and Feminist Majority Foundation were one of the first sites online, I chimed in with some friendly criticism that we need to keep moving foward.

I remember when I would check the FMF website obsessively hoping for something new because it was one of the best feminist sites out there. Not that they aren't today, but I wouldn't say they are the best. I should have given them props for not changing the look of the site too much. Somehow they got the design pretty good early on.

But I retold my tale of how my feminism grew with my learning online organizing tricks. That I learned a lot online and applied that knowledge on the ground. And despite being a Twitter holdout for some time, I praised it's worthiness and how Tweet-ups are just as important to the community as Tweeting. I also added in that many of us aren't paid to blog either.

I understand the push-pull that institutional organizations have with controlling the message. NOW can't open up a community blog or even a community blog where only members or leaders can post. Do I need to remind you that a NOW member endorsed Palin? But I do think that there's a few college-aged feminist bloggers out there who wouldn't mind interning at NOW & FMF so they can build on that platform. I know it won't happen overnight, but I'm very optomistic that these orgs will be blogging or using social networks more than we see them today.

I don't feel like I was as eloquent as I've written here, but I hope it got thru. As someone who is an active NOW member and has written for Ms. magazine, I know (hope) that Kim & Eleanor know that my suggestions are constructive only.

I'll debrief on the two amazing panels soon...hold me to this one!