And when I say experiment, I mean it. If a green thumb is what people have when they have the abililty to grow things, I have an icky brown-yellow of a dead wilted plant. So when I received an email from Cook's Garden I hesitated. I think the idea of gardening is awesome and I think more people should do it. And more people are! But who am I to tell people what seeds to get & all that jazz? 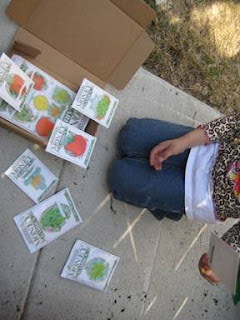 Instead I emailed back and said, "What if you sent me a pack of seeds to experiment with and I'll blog it?" And obviously they said yes.

I received one packet of Burpee's Money Garden seeds. They are called the Money Garden because if you spend $10 on the packet you can grow up to $650 worth of veggies. Now I live in Chicago and am lucky to have a backyard, but I'd have to turn my entire backyard into a garden to get $650. I figure we might get $150 worth of veggies with the tiny amount of seeds we planted. 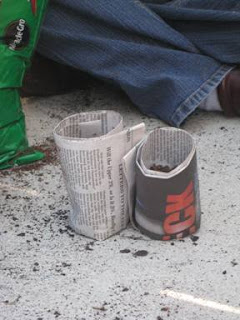 We also got a packet of Kaleidoscope Carrot Mix -- multicolored carrots! Our daughter is super jazzed about these. She really loves gardening.

Last weekend was almost perfect for mid-March so we ended up doing our planting then. I consulted with Cinnamon, who along with Andrew, grows her own herbs & other goodies. She had read in the Chicago Tribune a trick that you make these paper cups to start your seedlings out in (see photo). Then after a few weeks you transplant them to the garden -- I assume after the last frost. See, this is why I need a consultant.

So the seeds are planted in their lil cups and then they have been placed in a window garden box so we can keep them outside, but bring them inside when needed.

If they survive until the last frost, we'll move them into the garden! If not, I guess we might try again...We do have plenty of seeds.
Labels: garden