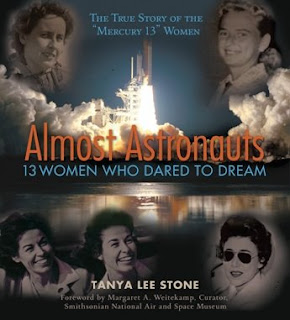 Forty years ago today two men fulfilled a fallen leader's challenge and landed on the moon.

When I was a kid, I was obsessed with NASA and astronauts. One year I spent the entire summer studying for the Air Force Academy's entrance exam because I thought the best way to be an astronaut was to be a pilot. The only thing that I didn't learn was that years before Sally Ride was shot into space, thirteen women were willing, ready and able to do the same.

In Almost Astronauts: 13 Women Who Dared to Dream, Tanya Lee Stone, takes us back to a time before Title IX, before women in science programs, before the second wave of feminism, when it was all too easy for the US Government, NASA and a Vice-President to simply say no to women dreaming of floating among the stars.

The discrimination against these 13 women was atrocious. Every single test that was set up, these women passed with flying colors, yet NASA still said no to them. Many of the men of Mercury and Apollo missions testified against the women in front of Congress. The wives of astronauts would also speak up against the women. But the 13 women weren't alone...Scores of women across the country took to the streets and wrote letters to the White House demanding that the 13 women be allowed to enter the astronaut program.

Almost Astronauts is a moving young adult book. One that tells a simply story of women striving to fulfill their dreams. One that fills in some holes in American history, but I didn't feel was hitting young people over the head with the feminism stick. The photos and historical documents shown are powerful. I would recommend this book to any young woman, especially one in high school who is ready to take on the world on her own, who may be questioning where she will take her life and definitely one who may be dreaming bigger than most people think is proper.

Three days from today, we will mark the 10 year anniversary of Eileen Collins becoming the first woman Space Shuttle commander.

Grab a copy for yourself at an indie bookstore or Powells.com.