Book Review: On the Line by Serena Williams 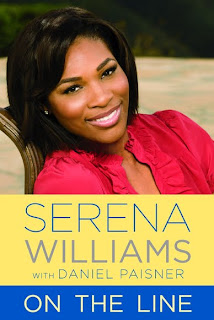 I love everything about the U.S. Open except the line calls.

I experienced this past weekend's U.S. Open upset for Serena Williams with a different perspective than if I hadn't read her memoir On the Line. The book is written in Serena's voice. It's personal, it's conversational, and that's why I like it. I enjoyed her reflection on her life thus far.

I have to say that Serena is a spoiled brat, but that observation comes from her directly. She tells stories that curled this big sister's toes of scheming to get her way, cheating, and destroying her sisters' property. In looking back at all that peeking thru her fingers, I respect Serena for her honesty and self-criticism, and I agree with her judgment that she was a horrible little sister!

Serena spends a lot of time defending her father from the criticism he still receives about his coaching style. While her mom was pregnant with Venus, Serena admits her father decided that they would raise two tennis champions, and well, they did. He and Serena's mom taught themselves the game by playing and watching videos then he taught his daughters while they were living in Compton by playing on public courts. Even if the man is a controlling jerk, as some said early in the Williams Sisters career, you have to admit there's no country club pedigree here!

Serena digs deep to tackle the class and racial privilege they smacked into when Venus hit the tennis scene in a chapter on the 2001 Indian Wells tournament. Clearly, the girls were raised with a keen sense of history, especially civil rights history, and I've always admired Venus and Serena both for the way they play and for their tip of the hat to those who came before them.

Serena has a clear sense of racial and gender justice. Not only does Serena spend time discussing race and class, but she addresses all the fat comments she has received over the years. Positive body image is big with her. She understands that, as an internationally known tennis player and someone with more money than most of us will ever know, she has a responsibility to others on many fronts. I didn't follow all the Oprah criticism when the star built a school in Africa, but Serena gives the best response to that criticism I've ever seen by wrapping her justification around a touching story of visiting difference countries in Africa and wanting to do something.

She also lets us in on how much fashion has always played a key part of her and Venus' game. They weren't strong women athletes who "discovered" fashion as a way to sell themselves to the media or fans. They are savvy business women who aren't afraid of taking chances. Along with her sister, Serena will continue to blaze a path for herself and for others.

Even if you aren't a tennis fan or even someone who follows the players closely, we all know that there are some players who make a splash and then disappear or even worse, publicly self-destruct. Pressure and age are often pointed to as the factors as well as pushy parents. It's clear from this memoir that Serena and Venus couldn't have been "The Williams Sisters" without each other. Serena Williams has it all and survives. She did it despite a battle with depression, which she outlines with grace.

Serena haters won't like this book at all, but if you are truly interested in finding out what makes this powerful woman tick, pick up this memoir. It reminds me that Serena's been counted out far too many times and has always come back. She dug herself a hole this weekend, but I have faith that she'll redeem herself and silence the critics... again.

TV APPEARANCES: Hachette Books let me know that Serena has the following TV appearances scheduled for this week. Considering that she did the VMAs last night, hopefully these are still on: Good Morning America on 9/15; Live with Regis & Kelly on 9/16; The Daily Show with Jon Stewart on 11/10; Tyra Banks Show on 9/15; Your World with Neil Cavuto/Fox News Channel on 9/14; On the Record with Greta Van Sustren/Fox News Channel on 9/14; Martha Stewart Show on 9/16

DISCLOSURE: I have a relationship with Hachette Books where they pitch me books to review and when I accept they send me a book for free. So far they have been pretty good at pitching me books that I really do like. Can't say that for everyone who pitches books to me.
Labels: books race reviews sports