Seeing Dedé Mirabal was a challenge for me 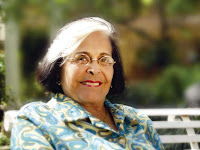 Today I went to see Dedé Mirabel talk about her memoir, Vivas en su jardin.Why would this be such a challenge for me? It was in Spanish.

For new readers, I don't speak Spanish very well. I wasn't raised speaking Spanish and despite four years of Spanish, I still think I'd never find my way in Mexico if I were lost. Althou, survival Spanish may seriously kick in. But I wanted to hear and see the lone surviving Mirabel sister, the one left to tell her sisters' stories of opposing the cruel dictatorship of Rafael Trujillo and were assassinated in 1960.

Luckily for me the event was translated into English.

Unlucky for me, it was at my campus. I seriously hate being in very public places and looking like the gringa Latina I am. But I sucked it up and grabbed a translation headset and sat down for the event.

There were times when I took the headset off to test or push my Spanish. I quickly would put them back on when I realized I was losing the conversation. And I have to tell you that Mirabel is quite a story teller.

She sat solemn-faced while speaker after speaker introduced her and spoke of the importance of her memoir. Mirabel was so composed as they spoke of her sisters' deaths, but you could also tell that memories were flashing in her mind. She would take deep breaths and even close her eyes for a moment. But when it was time for her to take questions, she had to stop herself from talking for the rest of the time. She even said so a few times.

Mirabel said that she had started on the memoir after years and years of people asking her questions about the time and finally someone told her to write it all down. She worked with a journalist for I believe 20 years - again, perhaps an error in translation - to get out. Mirabel said that she worked on the memoir not to keep the memory of her sisters alive, but to keep their example of how to live alive.

Obviously back then TV and radio was limited and the story of the Mirabel sisters spread thru word of mouth. Soon their story had a life of its own and had a fairy tale/mythic feeling to it. Mirabel said that there are still times when people ask to touch her just to make the story real to them. Althou the reality of being a Mirabel was clear when non-relatives changed their last names to avoid the contempt of the government.

The question is gets the most thou is "What wasn't she killed?" and "How did she survive it?" She says she wasn't killed because she was to tell the tale. Her mom and Dedé  raised the motherless children as their own. It was the kids who kept both of them living after such horror and heartbreak.

Dedé was amazing to see. I often romanticize what it means to be a sister, but I saw it in the flesh.
Labels: books latina me