Should High School Girls Have To Take Gender Tests? - From Awearness 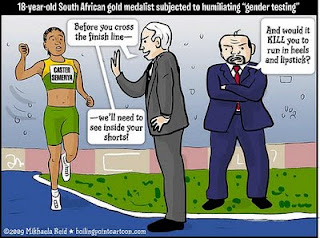 Last week, Caster Semenya's gender tests revealed that she has both male and female sex organs. This means that Semenya is intersex.

Reacting to the findings, Lord Coe, a vice-president of the International Association of Athletics Federations (and a world-record-setting runner and former Olympian), wants a rule change in order to "eliminate competitive advantages." He's also concerned, he says:


about protecting athletes like Semenya from "the risk of entering a championship and having this exploding all around them," as well as the other young women in sports: "We have to maintain confidence for girls to come into the sport and to think that they are competing on a level playing field."


Does Lord Coe suggest that we do gender testing at high school in order to protect the sport and athlete? My friends & I started running track in fifth grade--how about then? From what I have been able to piece together from news pieces, Caster grew up as a girl. Can you imagine the shock if at age 10 you were forced to take a gender test only to realize that you are not who you think you are? All to run around a track.
This is the problem with our binary gender system and insistence that people fit into what we think is proper for that system. Who are we to say who is or isn't a woman or a girl? Yes, we can have people take tests and see what chromosomes they have inside, but it tells us nothing about who they really are.

What does it mean to be a woman/girl? Is it all about chromosomes and/or plumbing? How can a family properly raise an intersex child in this world that wants everyone to be one thing or the other, nothing in between? For this family, it means allowing your child, no matter how young, to express their gender the way they want.

Currently rumors are flying that Caster is on suicide watch. I hope that she is seeking out a professional to talk all of this out with. An entire world is looking at her and many are judging. I hope she also knows that she has supporters who wish her well.

If something good is to come of this circus I hope it is that we all educate ourselves on gender variant people and how those of us who are intersexual or cisgendered need to be able to their own choices--and to run, if that is what they choose to do.