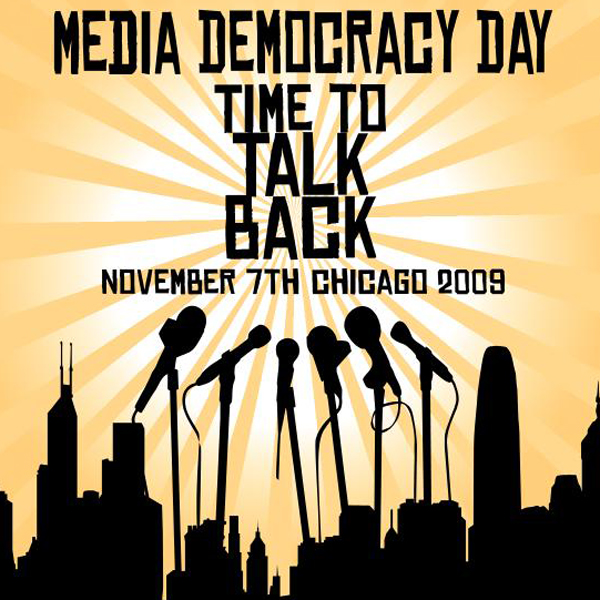 Join fellow progressive media professionals and activists to discuss how we can work together to create more media democracy and media justice, important steps to building a just society.


The Metro Chicago Progressive Media Network …
invites you join us for ...

. PROMOTE MEDIA THAT INFORMS THE PUBLIC ON IMPORTANT ISSUES!

. NETWORK WITH OTHER PROGRESSIVE MEDIA PROFESSIONALS AND MEDIA ACTIVITS

. CREATE MEDIA INITIATIVES TO STRENGTHEN DIALOGUE AROUND THE CHALLENGES FACING OUR WORLD!

Initially Media Democracy Day (MD day) was organized by local Toronto and Vancouver groups of the Campaign for Press and Broadcasting Freedom. In 2002, events were held in cities around the world. A Media Democracy Day has been held in Chicago in the past.

Today the tradition of MD Day is carried on by local citizens and student groups in Canada and around the world. This year a group of media activists and professionals is planning for 2009 Media Democracy Day - Chicago with the objective of including representation and participation from all around the Chicago area. The timing of the event is planned to coincide with the date of Media Democracy Day in Vancouver, Canada.

Goals of 2009 Media Democracy Day - Chicago:
1) to bring together area progressive media professionals and media activists to share their perspectives on how we can promote a media system that informs the public on important issues and provides media access to all segments of society.

2) to create coherent messages and media initiatives to draw public attention and broaden and strengthen dialogue around serious issues and challenges facing the area, the nation, and the planet.

2) alternative media of all types, including TV, radio, print, internet, performance, and graphics,

3) public awareness and education about the media, and

4) the media environment, including legislation and regulations.*

Tract 2 - Skills Sharing, such as blogging, video, and editing

Part III - Report-back The last component will be a facilitated report-back session. A summary of the report-back will be made available to interested attendees. LIST OF

Progressive Media Network (MCPMN), which was formed in November 2007, is an area networking group of media professionals and media activists,