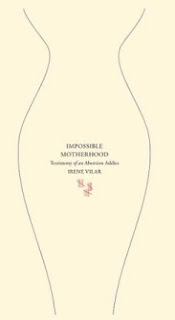 The book is traumatic with a capital, bold T. At one part about 1/3 of the way thru, I threw the book down in disgust and decided I was done. You are warned.

Impossible Motherhood by Irene Vilar has received a lot of press and been a topic of debate on many a listserv due to the subtitle "Testimony of an Abortion Addict." When I first found out about this book my first thought was "Oh shit." Many people, including Vilar, believe that this book will be used by anti-abortion activists as proof of women using abortion as birth control and thus a reason for the procedure to be banned outright.

But if you read Impossible Motherhood, you'll soon discover that abortion is the hook not the heart of the story. Rather you find a sad story of a young woman thrust into an adult world and quickly found herself in a situation most of us would probably fall apart in as well. Depression soon engulfed her life, althou it was most likely merely lurking in Vilar's life after her mother's suicide.

Her 15 abortions didn't cause her depression, rather just like a 2008 American Psychological Association task force found, abortion can exacerbate depression that is already present in a woman's life. It was more of a symptom of her out of control life rather than a catalyst. And that is important to keep in mind.

While Vilar's life is more dramatic than most reality shows and it sometimes hard to believe, it does make you stop and wonder what you would do in her situations, especially as each abortion occurs.  She falls in love with a bully 34 years older than her who "enlightens" her that children and family weigh you down, so a free and independent woman must remain child-free and thus is her excuse for multiple abortions.

Interestingly Vilar claims the label of feminist. She reads feminist authors and talks about them. She finds some strength in them, but talks about how feminism had no answer for her. And honestly I believe she is correct.

What I took away from this book was that while so many of us will fight to the death for abortion rights, many of us would shun Vilar from the movement due to having 15 abortions. She turns to the same people in her life. Would you stand by her abortion after abortion? I honestly don't know. One or two we can forgive* support, but after that many of us start to blame the woman for not taking care of themselves, not protecting themselves, etc.

Another interesting aspect of this book is that this is Vilar's second memoir to cover the years she spent with her ex-husband (the bully). In her first, she talks says it was the happiest time of her life. Obviously in this one she takes a difference view of her marriage. With the number of memoirs being written by younger people (anyone under 50, I'd say) I think there is a lot that could change. Perhaps not as dramatic as Vilar, but think about how you looked at your 20s at age 30 then perhaps 10, 20 years later.

Do I think you should read this book? I'm not sure. It made me think and made me furious. The abuse she suffered in her marriage is what sticks with me far more than her abortions.

Politically you should read this book because I believe it makes a great case of why abortion can't be stopped by legality, if a woman wants one, she will get one. I also think the anti's will use this book and we should be aware of what Vilar actually says.

If you get a copy, please get one thru an indie bookstore or Powells.com.

If you have read this book and would be interested in an online chat or email discussion about the book, please leave your info in comments. A lot of us are conflicted about the book and a few of us have discussed this idea. Thanks!

Disclaimer: The only payment I received for this review was the copy of the book.

* Read my comments to see why I changed this word.