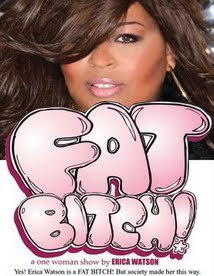 I promise a much better review when I get time to write it up, but for Chicagoans, TONIGHT is the last night to catch Erica Watson and you had better not miss her.
Last night I got to watch an amazing show. Watson is genius at critiquing our weight & beauty-obsessed society (as she says, ugly fat bitches who lose weight just turn into ugly skinny bitches) as well as patriarchy. OK, she doesn't use the word patriarchy and that is where her genius lies.
Watson is able to do what PhD students do in an entire thesis, but she makes you laugh the entire time and without academic speak. For someone who flunked out of UIUC with Ds and Fs, she should type up that routine and get handed the PhD. Dr. Fat Bitch!
And her use of the word bitch is partially empowering, partially not so much. But it's used well.
While the audience was overwhelmingly African-American, us lighter skinned peeps were laughing just as loud with the jokes. She critiques race issues without resorting to stereotypes like other comics.
TONIGHT's show has many specials attached:
1. Two for one tickets at the box office. That's two people for $15. Can't beat that deal in Chicago!
2. There will be a raffle for a pair of Bulls tickets versus the Charlotte Bobcats - 6 tickets for $5 was last night's prices.
3. The after-party is at Funky Buddha!
Seriously, if you can make this show, do it.
I got to see if on a media pass after Watson's agent contacted me after a friend in NYC sent her to me. But if I didn't almost pee my pants from laughing so hard, I would NOT tell you to go.
I do have to warn you that the Chicago Center for the Performing Arts had some major heating problems last night. Wear an extra sweater if you want to take off your coat. It was COLD in there last night.