You know that have been trying to be a better marketing person, meaning that I'm not going to allow my blog, twitter or other space to be used to shill for any old product. When I realized I was coming up on my 15,000th tweet (yeah, I tweet a lot) I was hurting to come up with a good giveaway to celebrate.

For you my dear readers and followers, simply leave a comment here and I'll randomly choose one person to receive a Steaz gift pack. EXTENDED>> Deadline is 11:59 PM, Saturday, January 16th. 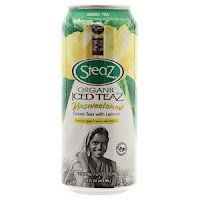 What's Steaz? I didn't know either until Wednesday night when I attended a blogger PR dinner event hosted by Kim. There's a long description of what the company does and why, but bottomline they make soft drinks, ice teas and energy drinks. BUT they are certified organic. AND vegan. Vegan? How can a drink be vegan? At least compared to big name soda companies? It's the sugar. Regular old sugar is processed with charcoal and it's most likely bone char. Yes, some the sugar we normally eat is processed using animal bones. I also met Eric one of the owners. I'm a jaded mom blogger, so I was waiting for the big glitzy show. Instead I got to meet a guy who was raised by hippies, who installed solar panels with his dad and whose sister is a real estate agent who specializes in green homes. Um, ok...

That got me thinking...Are hippy kids allowed to maintain their hippy roots AND make a buck? Well, yes, yes, they are. Should I do marketing and PR for them for free? Um, why not? This one time.

One other aspect of their story that moved me is that they are an example of the Power of Moms - They were asked by Target to be one of the first organic products after moms demanded that Target start carrying organic products. You know that part of my motive for blogging is to help moms see their power and then wield it. It wasn't an organized movement, but enough moms spoke out to Target, sent emails, talked to managers, whatever, but they used their voice and pressured Target to carry organics.

I've only tasted two of their products - peach ice tea, which wasn't my cuppa tea. Althou I should try it again well chilled. I'm uberpicky when it comes to teas. I forget which flavor of soda I tried and it was ok. Again, I should try again with a glass of ice. Ya know sometimes that's all a drink needs. But I was sold on this company by their story. Because of that, I'm willing to try some more product (thanks to my gift bag) and giveaway one gift pack.

And in the spirit of Viva la Feminista, for every comment left, I will donate $1 to CARE for Haiti relief. If you don't want to be entered into the Steaz giveaway, just note it. I already donated $50, so this is a new batch of money. I will limit the donation to $100. I know my pocket book limits! Another way to support CARE's work in Haiti is to shop at Cinnamon's Poise shop where she will donate $20 for every purse sold.

So what are you waiting for?

Thanks for reading, following and connecting with me. I know I'm a chatty chica, but I hope I'm worth it.
Labels: blogging giveaway