Why I Give to Women-Focused Relief Organizations


This was originally posted at the AWEARNESS blog. Click on over, the only comment I've gotten is from someone calling me sexist. Thanks to all the Twitter love I got!

Edited on Feb 1, 2010 to add: I'll be adding articles at the bottom on women-centered giving or relief efforts in Haiti.


When the earthquake hit Haiti last week I decided to direct my giving toward CARE, an organization that focuses its work on women. Some will question why I don't give right to the Red Cross, a very worthy organization. The honest answer is that I want to give my money to an organization who will put women and mothers as a priority. It's not a sexist statement, as much as a truth that reflects our gendered world.

Women are the caregivers of not just their families, but also of their communities around the world. Women know who lived where, who needs help, and so much more vital information that relief organizations require. Add in the fact that with globalization of our economy there are many parts of our world where women far outnumber men due to men immigrating to big cities or other countries, and well, you see how women get left at home to hold things together. When women do immigrate for paying jobs, they leave farming behind, hurting the community. Bottom line, when you put money into women's well-bring it impacts the entire community.

That is why I sent and will continue to send money to CARE. A gendered response is necessary. It doesn't mean that men and boys aren't important. Far from it. It means that women do have certain needs that men don't -- pregnancy, motherhood, and menstruation for starters -- that need addressing. When I give to women-focused agencies, I know they will make sure that women's needs are addressed.

I understand that you may think it's wrong to see this tragedy through a gendered lens, but the impacts will be gendered. And regardless of what you think of me, I hope you will give as generously as possible to whichever organization you support. Long after the cameras stop rolling and Anderson Cooper comes home, Haiti will continue to need us. 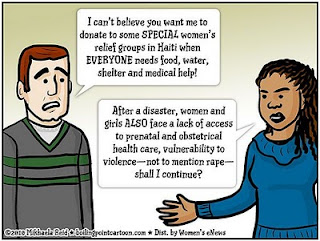 Women eNews has an excellent article on how the Haiti quake is impacting pregnant women. For those of you still questioning the need for a gendered response (mind you NOT one that ignores men, but instead deals with the harsh realities that women face more often then men) I ask you to read the article. Here is one excerpt:


Of the 3 million people affected by the 7.0-magnitude earthquake that hit Haiti, and the aftershocks that continued as recently as Jan. 20, an estimated 63,000 are pregnant women. In the month ahead, 7,000 women are expected to deliver. Giving birth or seeking prenatal care in a city where even the presidential plaza is destroyed poses countless risks to women in Port-au-Prince and throughout the quake region. The New-York based UNFPA has spearheaded efforts to help minimize the risks these women face.

Cartoon by Mikhaela B. Reid


From the Chicago Sun-Times: Relief workers began handing out women-only food coupons, launching a new phase of what they hope will be less cutthroat aid distribution to ensure that families and the weak get supplies following Haiti's devastating earthquake.

Young men often force their way to the front of aid delivery lines or steal from it from others, meaning aid doesn't reach the neediest at rough-and-tumble distribution centers, according to aid groups.


From Women eNews: With 45 percent of Haitian households headed by women, a number of United Nations agencies are targeting their relief efforts at Haitian women to help them overcome their human and material losses from the recent earthquake.


"They are the ones who are the economic as well as the psychological mainstay of children and other dependents, the aged and the sick," said Roberta Clarke, regional program director for the United Nations Development Fund for Women, or UNIFEM.

From Feminist Peace Network: In Continuing To Address The Needs In Haiti From A Gender-Informed Lens FPN is also linking to stories about gendered relief efforts.

"With the blackout that's befallen the Haitian capital, bandits are taking advantage to harass and rape women and young girls under the tents," Haiti’s police, chief Mario Andresol, said yesterday.