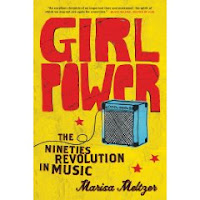 I am totally unqualified to review this book as I totally missed the Riot Grrrl moment. On the other hand, I totally dove into the Lilith Fair moment, so I think that I could write the rebuttal or sequel to Girl Power: The Nineties Revolution in Music by Marisa Meltzer, as Meltzer says she never attended Lilith Fair. But I don't hold that against her.

Girl Power is a quick read. In fact I dare say that it's a must have on your summer 2010 reading list. It's not fluffy, but at only 145 pages, it delves thru the 1990s women's music scene quickly and in fairly accessible language. In other words, Meltzer doesn't compare Avril to Courtney by using uber-academic jargon. Because of that, I'd also say that this would make an awesome book group selection. I can only imagine the music throw downs at the Women & Children First Feminist book group.

As someone who missed the Riot Grrrl moment, I really appreciated reading about how it came about, got popular and then essentially killed itself thru a media boycott. Meltzer ponders if that would have been conceivable in today's media soaked culture. I concur.

But what I found most intriguing about the book was how Meltzer outlines how a group of feminists grabbed guitars, drums and the mic and launched a very real music revolution and then how that revolution was so successful that it is quickly evolved into what we typically think of as "Girl Power" music.

From Alanis to the Spice Girls, few pop "Girl Power" acts are left un-examined as to how well they stay true to feminism and the benchmark of Riot Grrrl. Meltzer also looks at how some Riot Grrrl acts moved into the mainstream and how that impacted their music. One could use this book to examine just about any grassroots, indie movement to see how it evolves into something vastly different in a short amount of time.

The immediate thing I thought of was mom blogging. How we went from moms using blogging as a medium to reach out and find intelligent adult conversation while raising our fab kids to a community where we are thought of as idiot product whores. Meltzer discusses how once Riot Grrrl peaked, others joined in, but not to spread radical ideas such as embracing our sexuality as women, but to cash in on fame and sometimes money. People started to see newbies rocket to stardom while those who paved the path were left behind, sometimes willingly. This is a familiar plot line from many movements.

I didn't agree with many of Meltzer's conclusions such as grouping P!nk with Avril as bullies. She points to "Stupid Girls" as being problematic by calling out specific "stupid girls" instead of calling out society. I think that's exactly what P!nk does by calling out "tiny dog" accessorizing celebs. Maybe I'm just still reeling from Meltzer making a great case as to why the Spice Girls were a good thing and not P!nk. And reeling in the sense that I think it's an excellent case and one we should all reexamine.

My daughter has taken a liking to this book solely due to the title.

The kid has asked me how I have liked the book, what it's about and tried to read over my shoulder. This is a book I do plan to leave on a shelf for her to have easy access to when she's around 10. Maybe a bit sooner, but 6 is still too soon for me to discuss rape with her. But the thing is that she knows "girl power" and what it means to her. I asked her and she said, "That girls can play soccer, girls can play chess and girls can play guitars!" Then she laughed and confessed that she cribbed that response from the cover of Girl Studies. I tell ya, she's a smart cookie. But if even 75% of girls her age know "girl power" as a slogan that translated into "Of course, I can do X!" then isn't that a good thing?

I guess it can be a not-good thing if the girl in question doesn't have someone in her life to build upon that feeling and reinforce it.

Hopefully you get that the bottom line of this review is that it was a good read, a fast read and one that did make me ponder if it's feminist to "go down in a movie theater" or not. So whatacha waiting for? Grab a copy thru an indie bookstore or Powells.com.

Edited on 2.26: I had to add this link to the kid's debut at Feministing.

Disclaimer: The only payment I received for this review was the copy of the book. I met Marisa years ago when she was with Bitch magazine, but I highly doubt that it is why when I asked for a review copy, her peeps sent one.
Labels: books feminism music reviews