Scott Lee Cohen's tune seems to be changing. The media is digging more into his story and painting an uglier picture. Early on Friday he was sticking to his stance that the people of Illinois had voted for him and he was staying. On Twitter a bunch of people were saying the same thing. Warning that if we let the party nudge someone off the ticket for being unsavory or unlikeable, well then democracy would start down that slippery slope of ethics into a place where party bosses would hand pick candidates.

What the hell do people think already happens?

Cohen represents not a victory for independent candidates winning out against the machine or party, but rather another prime example that if you blanket the airwaves and stuff enough propaganda into our mailboxes, your name sticks out on election day.

While many a people are in a huff over Mark Brown being an accomplice to Cohen's shenanigans by not reminding us that he had domestic violence in his past, it should be more clear to people that the Democratic party also failed us. Steve Rhodes at The Beachwood Reporter points out that the party started to worry as it looked more likely that Cohen might actually pull this baby out. Did they stand up and ask him to drop out at that point? Privately, who knows. Publicly? Hell no. Did they get together and pick a candidate to throw their weight behind? Again, privately who knows...Publicly, another failure of leadership. 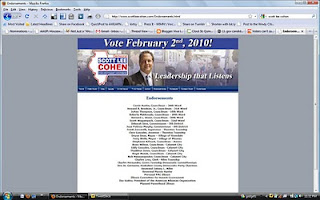 But now, now that the people know who Cohen really is, what he has done in the past and perhaps is still doing by not paying alimony and child support on time, the party leaders are coming out and asking Cohen to step down. Sadly my own alderman is STANDING by his endorsement, while Ald. Waguespack and Personal PAC have revoked their endorsement of Cohen. And while he didn't endorse him, Da Mayor won't ask Cohen to step down. Cohen's website removed the list of endorsements, but I took a screen shot and WBEZ copied it down. Take a look, if someone on that list represents you, give them a call.

While Cohen may be spending the weekend trying to walk away from this embarrassment with a shred of dignity, this isn't about his dignity or the dignity of the Democratic party for me. It's about how the media, politicians and others view domestic violence.

The Chicago Foundation for Women held a press conference with Chicago Alliance Against Sexual Exploitation, Illinois Coalition Against Sexual Assault, Voices and Faces Project, Chicago Metropolitan Battered Women’s Network, YWCA Metropolitan Chicago and Rape Victim Advocates to denounce HOW domestic violence was being treated in the Cohen situation. Kelly White, Executive Director of Chicago Foundation for Women: "Domestic violence is not about having a bad day, or going through a rough patch in your life. Domestic violence is not about falling in with the wrong crowd or taking a bad drug. Those are excuses and platitudes that we’ve heard too many times and we shouldn’t accept in our families, from our neighbors or certainly not from public officials.”

Cohen's story does not just involve hitting his ex-wife or threatening his ex-girlfriend, but that ex-girlfriend works at a massage parlor known for prostitution. Massage parlors, in general, are often sites for not just prostitution, but human trafficking. According to a 2007 Cook County report [PDF], 90% of the "$14 billion dollar industry...occurs through supposedly ‘legal’ establishments such as escort services, strip clubs and massage parlors." The CFW press release frames the issue: "Large numbers of women residing in Illinois thus experience domestic and sexual violence. Every day 16,000 women and girls are involved in prostitution and sex trafficking in Chicago, the vast majority of whom experience high levels of violence and exploitation."

The ability for so many people before and after the election to wave off Cohen's actions speaks volumes to how we view domestic violence. Other candidates knew of Cohen's issues, others in the media must have known as well. Brown couldn't had been the only columnist to know as well. But clearly, clearly the party knew what was up and did nothing.

Yes, as voters we need to know who we are voting for, but we also rely on the so-called Fourth Estate to keep citizens informed. I am trying to figure out how must of this is a failure of the press versus failure of how far the media has fallen in terms of lack of staff, researchers and plain old space in the newspaper.

In the end, my objection to Cohen being on the ticket is that he is an abuser. He has admitted that he abused his ex-wife and I don't accept the excuse that he was full of roid rage. Yes, people change, but his actions and words from the past few days tell me that he's still got a lot of growing, learning and changing to do. And I don't want to pay his salary as he's doing it.
Labels: politics VAW