Courageous. That word was on the kid's spelling list last week. Even if the teacher called the entire list bonus words, she worked hard to learn all ten words including this one that stumps me once in awhile. I won't find out until Friday if she spelled them all correctly, but she worked hard, could spell them for us and felt great afterward. That's all I can ask of her for bonus words.

Part of asking kids in first grade (even if they are doing second grade work) to spell a big word like that is that we have to define it for them. I can't remember exactly how I defined it for her, but I'm sure I said something about doing something even thou you are afraid.

On Friday I took her out to Vertical Endeavors and she did this: 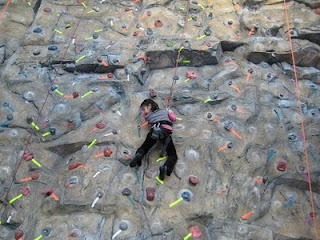 We rock climbed for about three hours and had a blast. At first she was scared of going too far up and definitely of sitting back to glide down. If you've followed the tales of my kid, you know she's not a fearful one. But standing at just 4 feet tall and looking up at 40 foot walls, well, I was a bit hesitant once I got climbing too. In the picture above she's about half way up. She eventually got all the way up 3-4 times on two different lines.

When she started to show signs of fear, I told her to be courageous. She giggled and tried one more time to inch her way up. Sometimes it worked, sometimes it didn't. Near the end of our time, I was really pooped. This mama is way out of shape and rock climbing doesn't help my carpal tunnel. Hell, my knuckles still ache! But she had shimmed down on her own and I was stopped. I told her I was ready to come down and she yelled back, "You can do it mommy! Be courageous!"

Do you have any idea what that does to a parent?

I made it to the top of that wall. And then called it quits for the day.

It took courage for me to take her out there. Yes, I'm still a tomboy at heart and take enormous pride in her climbing and bad ass skills, but each time I see her do something like this I'm torn. Instead of picturing a devil & angel wrestling on my shoulders, picture me cheering her on versus me telling her to get her butt down. I am so afraid of her getting hurt as she discovers what her body can do.

It took courage for her to trust me. I talked her thru a few tough spots. Spots where most people, including myself, might have just said screw it and stopped.

At the end of the day what she got out of the day was a new sense of what she can do. I can only imagine what it would had been like to be 6 1/2 and accomplished something like that. The only equivalent I had growing up was walking up the metal giraffe without using my hands. Anyone remember those?

But you could see the pride in her smile. Not only the pride she got from climbing to the top of the wall, but every half hour or so, someone would walk into the area and say, "OMG! Look at the little girl!" You can't buy that kind of self-esteem boost. OK, maybe I did for $15 + $10 rental of harness, shoes & the chalk bag she adored. But I didn't buy one step of her climbs.

I encourage every parent to let their kids push themselves to the limit. For your kid it might be on a rock climbing wall, for others it might be in a band. Whatever your child is good at, push them to discover a new level. And then step back. Don't hover, don't helicopter, don't put doubt in their heads. They will fall, but they have to learn to pick themselves back up too. There are plenty of times the kid has fallen and walked away as well. But at least she tried and I didn't limit her.

As parents we need to be courageous...Even if it means watching them climb far out of reach.

*************
BTW: The staff at Vertical Endeavors were awesome and super kid-friendly. I do picture us returning there, perhaps during Spring Break. Hopefully we're not on the same schedule as the schools out there.
Labels: feminism parenting