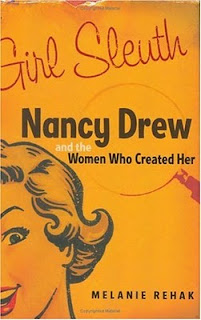 When my daughter was old enough for chapter books, I couldn't wait to get her a Nancy Drew book, specifically a young readers version of Nancy called "Nancy Drew and the Clue Crew." She fell in love!

It's precisely this handing down of Nancy Drew from mother to daughter, aunt to niece and super cool friend of Mom's to a young girl that has allowed Nancy Drew to remain one of the best selling children's book series of all time. In Girl Sleuth: Nancy Drew and the Women Who Created Her, Melanie Rehak does an excellent job at outlining the birth and rise to world domination of our beloved Nancy Drew.

The birth of Nancy Drew came from a combination of "father of only daughters finds feminism" and a new found attention of the massive buying power of teens. In 1922 "the Stratemeyer Syndicate [which birthed Nancy Drew] earned $9.1 million, $1 million of which was from [one of their girls series] (page 98)." Which leads to one of the themes of this double biography - the evolution of girlhood in the USA. How did such a strong girl character catch in the years between the first and second wave of feminism?

Girl Sleuth is the story of the two women who did indeed craft Nancy's character and sustained our appetite for more and more Nancy Drew mysteries. One woman charted her own path in writing and journalism, the other found a career opportunity out of her father's untimely death. Both were partners in crime, yet also were antagonistic to each other over the years.

What made me smile was the way that Rehak weaved in feminist history into Nancy's history. Rehak doesn't say that Nancy is a feminist character, but she does show us how the role of women in the workforce, girlhood and the emergence of the second wave of feminism all impacted Nancy's development.

This isn't a new book. In fact the series my daughter likes to read isn't referenced as it started in 2006 and this book was published in 2005. But it's a book that I've been meaning to read for years. Fellow book worm, Rachel read it years ago and said I had to read it and that I would love it. She was right. I received this book through PaperbackSwap.com.

I would add this to any summer reading list. It's an easy read, enjoyable and if you loved Nancy as a girl, you'll love this book. Purchase a copy from an indie bookstore or Powells.com and toss it in your bag.

* Book links are affiliate links. If you buy your book here I could make a very small amount of money that goes towards this blog.
Labels: books reviews