As a math nrrd, I'm a tad obsessed with the use of stats in public discourse, especially when being used in political debate. Lately I feel like all I hear about are stats about violence going up or down or perhaps into the fourth dimension.

Here in Chicago, many of FEEL that we're going through a very violent summer. Shootings here, there, everywhere. We had another violent weekend and ABC7Chicago reported on it by heading down to Garfield Park and talking to a long time resident. He goes on to talk about how he can SEE violence going up. Then ABC7-Chicago splashes these stats up on our screen 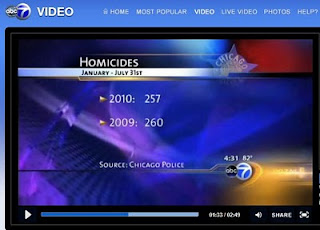 while quoting the Chief of Police that violence and homicides are down in 2010.

Did you see that? ABC7-Chicago gets a man in Garfield Park to discuss violence in his neighborhood and the ABC7-Chicago gives us stats for Chicago as a whole, as does the Police Department. This man could very well be correct, as could the police.

So I headed over to EveryBlock Chicago to churn the stats myself. First off, the stats that EveryBlock has seem to be just off from those that ABC7-Chicago has access to. But I think they tell the same story.

EveryBlock has Garfield Park divided into East and West, so I added the two neighborhoods together since the gentleman in the ABC7-Chicago clip identifies as from Garfield Park.

This is why I hate stats. And why we all need to take a good stats course or simply listen to the news close enough to know when they are comparing the city at large to a neighborhood.

Or in the case of Rachel Maddow, comparing a demographic to a city to a county to a state. Yes, my lil math nrrd head was spinning last night!

Visit msnbc.com for breaking news, world news, and news about the economy

She plays a clip where Senator Kyl is suggesting that violence is up for "some parts of the citizenry" in Phoenix and then Maddow goes on to show stats for property and violent crimes in the STATE of Arizona. I love ya Rachel, but come on, at least get stats for Phoenix. Sadly, EveryBlock isn't in Phoenix.

I don't think that this slight of hand is done maliciously.It's easy to find a stat that fits your angle and use it. But we need to hold everyone accountable. From our local news to the beloved Maddow, it's not just FOX who can spin a stat into proving that the world is coming to an end...or isn't.
Labels: media