Senator Durbin I'm betting that most witches are Democrats 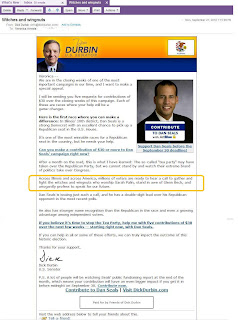 And clearly you haven't had any conversations with witches about witchcraft. We've met a few times, but I've usually kept my comments to policy. The fact that I'm a tree-hugging-Goddess-worshipper never seemed to be of importance. Of course now I wish I had pointed out my Goddess amulet that I wear every single day, that I do consider myself a witch and that I vote for you every chance I can.

So imagine my surprise when I opened my inbox to a note from you equating witches (my people) with wingnuts (so NOT my people), who are usually radical right-wingers.See the yellow box to your left for the quote.

Here are a few pointers for you:

1) Read Starhawk. She's kinda our Pope, except we don't have one leader, but she's in the news a lot and wrote a lot of books. She's amazing. Starhawk explains what it means to be a witch AND defends Christine O'Donnell. Defending O'Donnell means that Starhawk really takes the whole "love your fellow human being" to the core.

2) Read through Witchvox's FAQ. They have been around since 1997, so they are pretty much as ancient (internet-wise) as paganism itself.

3) We even have our own emblem for veteran's headstones! (scroll down to 37)

For me, being a witch/pagan is believing in the power of nature, of the Earth and believing that we're all connected. A few weeks ago I was burnt at work. Tapped out of energy. No amount of chocolate or coffee was going to bring me back. Instead, I took a walk and settled under a tree. Sounds hokey, but it works for me. My feminism is connected to the Goddess and she to my feminism. And my feminism is what grounds my politics and thus why I usually like you a lot.

I'm sure that there must be Republican witches (I think the Wicked Witch was one) out there, but for the most part, the witches/pagans/wiccans I have met are all open-minded liberals if not radically lefty. We might not be the biggest religious group out there, but we do take offense to being liken to something to be defeated, especially, for me, to radical right wingers who don't believe in women's rights, evolution or caring for their fellow human being.

Give me a call if you wanna grab a cuppa coffee to talk about witches. It is that time of year!
Labels: pagan politics