The Race for Illinois Governor

As my friends know, I abhor negative campaigning. A lot of you say you do as well, but I've seen studies that say that we are most impacted by negative ads - meaning they work...Up to a certain level at least. I've also read that negative ads hurt if voters feel overwhelmed by them. I've heard from friends who say they want to know why we should vote FOR someone not AGAINST a candidate.

In that vein, I want to vote for Green Party nominee, Rich Whitney. As Eric Zorn said in today's paper:


Of the five candidates for governor at the joint interview, Green Party nominee Rich Whitney was the best spoken, had the best command of the facts and, in my opinion, had the most sensible ideas for moving Illinois forward.

If we only had an instant-runoff voting system where a ballot cast  for a third-party candidate down in the polls, as Whitney is,  isn’t a purely symbolic gesture at the expense of a voter’s second favorite candidate.

But the reality is that we do have a system that a vote for Whitney could cost Democratic nominee, Gov. Pat Quinn, the election. Chances are that Greens and Dems have more in common and that Whitney wouldn't be siphoning off votes from Republican nominee, Bill Brady.

What kind of Illinois would Brady bring about? This video gives us a taste.

So what am I going to do?

Gov. Quinn did reject abstinence-only sex ed funding which is exciting. The Illinois Dept of Health & Human Services was just awarded $2.2 million in PREP funding. PREP is for "evidence-based programs that reduce teen pregnancy and sexually transmitted infections (STIs) and address other adulthood preparation topics such as healthy relationships, communication with parents, and financial literacy."

When I voted for Whitney four years ago, I wasn't as scared of Judy Baar Topinka as I am of Brady. I also loved the idea that if Whitney broke the 10% barrier, then the Greens would have an easier time getting candidates on the ballot. And that part happened.

Honestly Brady scares the hell outta me. The flier from Planned Parenthood Illinois Action (where I use to blog) states it pretty well: 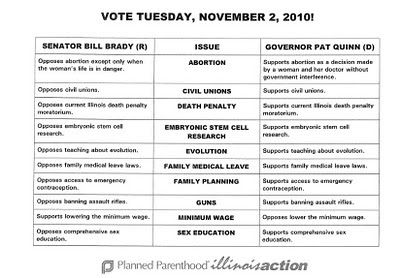 Illinois is a world of a mess. I think we need strong leadership, but I also believe that women's rights shouldn't be sacrificed in this quest for strong leadership. Of course, all our rights could be sacrificed if the state can't pay all the health care providers & other social service agencies that have been waiting for over a year for their bills to be paid.

I have a feeling I'll be debating this vote up until I have to connect the line on my ballot. I think Whitney has the leadership and vision to get us out of this mess, but he would be severely hampered by the General Assembly who wouldn't want to give a third party any credit. And that, again, brings me to Quinn, who I repeat, supports just about every issue I care about.

On top of all of this is the reality that I work for a state institution. Quinn gave his office big raises, while I continue to see great people lose their jobs and those of us left behind are having to do far more work than our salaries reflect, especially given that last year we had a pay cut.

Care to share who you will be voting for and why?
Labels: politics