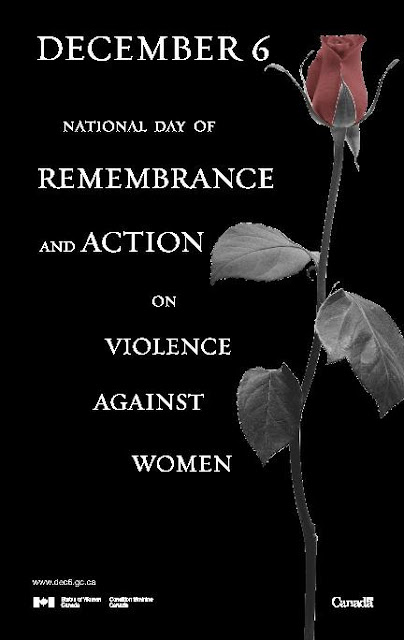 December 6 is the National Day of Remembrance and Action on Violence Against Women in Canada. Established in 1991 by the Parliament of Canada, this day marks the anniversary of the murders in 1989 of 14 young women at l'École Polytechnique de Montréal. They died because they were women.
As well as commemorating the 14 young women whose lives ended in an act of gender-based violence that shocked the nation, December 6 represents an opportunity for Canadians to reflect on the phenomenon of violence against women in our society. It is also an opportunity to consider the women and girls for whom violence is a daily reality, and to remember those who have died as a result of gender-based violence. And finally, it is a day on which communities can consider concrete actions to eliminate all forms of violence against women and girls.

Pretty much my whole career is about women in science & engineering. The murder of 14 young women who were studying to be engineers happened when I was still in high school, yet I still hear murmurs about women taking men's places in this or that. This act of terrorism was about privilege. The person who killed the women felt he was being overlooked because women were in the way. To think that some people still think that or make women feel like they are "in the way" or just there because they are women pisses me off like nothing else.

I've been busy with wrapping up my first semester in "The Great PhD Race," to write much or ask you all to remember to donate whatever you can ($10 or $100) to support the Chicago Abortion Fund. But I do hope that as you consider your end of the year giving, you will put CAF on that list. Thanks.
Labels: abortion actions science VAW women