Tiffany Dufu is the new President of The White House Project 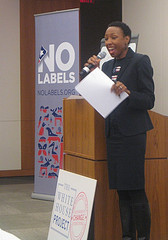 If you follow me on Flickr, you already knew this. I had no idea this information was embargoed until today. I swear! But hey, that's what happens when you invite people with digital cameras to an event, give them some awesome news and don't say "SHHHH!" Or maybe I was so freaking excited that Tiffany was going to be the next President of The White House Project that any shushing went over my head. Either way, CONGRATS TIFFANY!

Here's to passing of the baton. Thanks to Marie Wilson for her amazing years of leadership. I'm sure she won't be retiring to her porch, so let's keep an eye out for her next thing.

From the press release:

The White House Project...announces the appointment of its second President, Tiffany Dufu, on Inauguration Day, 2011.

“I can think of no better time to transfer the reins of power of The White House Project to the next generation than today, our country’s official Inauguration Day,” says Marie Wilson. “Tiffany is an extraordinary leader whose competence and passion for our mission will take the work to an entirely new level. For a founder, there is nothing more satisfying than leaving a loved institution in such worthy hands.”


Ms. Dufu has furthered her life’s work of advancing women and girls at The White House Project for the last four years, most recently as Vice President of Development and Administration. Over the course of her 15-year career she has raised nearly $20 million for nonprofits, forging new partnerships, support and strategies.

Says Tiffany Dufu, “The White House Project was founded to advance women’s leadership in all sectors of society, up to, and including, the U.S. presidency. As an African-American woman of the next generation, I believe that this transfer of leadership across generational and racial lines is emblematic of our country’s journey, and reflective of The White House Project’s mission and results. My vision for my administration is to harness the power of the 11,000 women we’ve already trained to lead around the country – half of whom are women of color – and to leverage technology to train hundreds of thousands more."

Ever since she accepted the Girl of the Year Award in eighth grade, Tiffany Dufu knew that she wanted to make a profound impact. Raised in the Pacific Northwest, the daughter of a homemaker and a minister, Ms. Dufu was an early feminist who challenged the perceptions of adults around her who often insisted “little girls can’t lead.” She knew that she needed not only to affect change, but also wanted to be public about it – so that other girls could be leaders, too.


As Associate Director of Development at the Seattle Girls’ School, a nonprofit education institution committed to giving all girls the power to be innovative, confident, critical thinkers, Ms. Dufu raised $2 million in just under a year. As Major Gifts Officer at Simmons College, she managed a portfolio of more than 150 donors, and worked in recruitment to create a more diverse student body. While in Boston, Ms. Dufu was featured in a Boston Globe article that, within 24 hours, became the most-forwarded article in BostonGlobe.com history. She leveraged the overwhelming response to encourage a productive dialogue in the city about race relations, and soon became a fellow in LeadBoston and a catalyst for the Commonwealth Compact project, working to make Greater Boston a desired destination for people of color and women.

As Vice President of The White House Project, Ms. Dufu has forged new partnerships, has strengthened the Corporate Council and has refined the organization’s strategy. Having now raised nearly $20 million toward the cause of women and girls, she has been featured in The New York Times, The Seattle Times and on NPR, and is a frequent speaker on nonprofit fundraising and women’s leadership. She currently serves on the board of Harlem4Kids, is a member of Delta Sigma Theta Sorority, Inc. and holds a B.A. and M.A. in English and a Certificate in Fundraising Management from the University of Washington.
Labels: politics women