Feminist Parenting: Searching for a Superhero

This post is part of the WAM! It Yourself Blogathon! WAM! It Yourself is a multi-city decentralized conference on gender and media run by Women, Action & the Media. Events are taking place in seven cities and online from March 20th to March 27th. Check out the full schedule of events here! 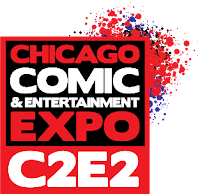 I hiked down to McCormick Place to attend the second annual Chicago Comic & Entertainment Expo on Saturday. I was able to attend by requesting a press pass. I'm not writing this because it was a condition of the pass though. OK, disclaimer out of the way. How did it go?
It was fun. I could only attend for a few hours, but it was fun to sit and watch all the fans walking around. The families passing on their love of comics & comic-related entertainment to the kids. The geek couples dressed up and holding hands. The groups who dressed up in themes or didn't dress up at all. But the group that drew me in the most were the dads walking around with their daughters.
After my pass was in hand, I headed to the expo floor to make a bee line to Dark Horse, the home of Buffy Season 8...and soon Season 9. I was disappointed at the lack of Buffy stuff, but I did get to spot a mock-up of the Buffy lunchbox, to be released in the summer, which may find a home in my kitchen. I did get to play with Dark Horse's app, which is freaking awesome. Alas, no eReader of any kind in my hands, so I'll leave the awesomeness to others.
Then I ran to the theater to catch a discussion on "The Walking Dead" and after that a panel on "Dollhouse." It was fun to hear from the actors. The funniest parts were when the actors realized that there were kids in the audience. This usually was preceded by an actor swearing (Jon Bernthal) or describing something in a sexual manner (Eliza Dushku, "I'm so going to hell...").
So I offer these suggestions:
* Parents: If you are going to a comic book convention or such, please remember that there will be adult language and most likely adults dressed up in costumes not suitable for children's eyes. Some ladies like to wear corsets and fishnet stockings. Some guys do too.
* Actors and others we pay money to gawk at: As much as you might think, "Oh, my work is too violent for a 5-year-old!" There's a 5-year-old in the audience because her mom thought it was ok to watch your movie or because his dad loves your work so much, the kid is playing on the floor.
*Somewhere in there is a nice middle where we can be comic geeks and parents all at the same time.
As the mom of a girl (who was not with me, she had prior commitments) I did keep an eye out for kid-friendly and especially girl-friendly comics. I found a few that I'll check out, but no real stand outs. Then I saw a few more dads walk past me with their young daughters. "What is he thinking?" So I asked.
I walked up to a man who had two young girls in tow. "Are you the dad of these young women?" "Yes, I am." I introduced myself and asked him what he thought of comic books and the comic industry having two types of women characters, (ditzy) girlfriend or sexy hero. "They were just talking about that! Girls, you were just talking about this." He introduced me to his daughters who were about 10. Sorry, I was short on time and didn't ask vitals. They went on and on about how they were in search of a superhero. One of the girls had chosen Poison Ivy ("She's evil!"), but wanted another woman character to love. Her sister was hesitant about Poison Ivy, so was far more eager to identify a woman comic book character (didn't even have to be a hero) who was smart and wasn't "just the girlfriend." The dad also talked about the need for strong women characters for girls to read about. He was definitely disappointed about the current crop of offerings.
If I had spent more time at the expo, I would had asked a mom with a son about what she thought comics were teaching him about women. Although, I feel like that question might feel a bit attacky if I didn't know the person. "So what do you think this busty woman is teaching your 10-year-old about women? Huh!?"
Sunday has been kid's day and they get in free. Hopefully if the cards align properly, we'll plan a family trip to C2E2 2012 on kid's day and wander around asking parents these questions while the kid tries to find her own superhero. I really want to know more about how parents navigate this territory. Comics not only have depictions of adult bodies that are totally unrealistic, even for guys, but they are also high on violence. Are the parents who bring their kids to shows like C2E2 the "cool" parents? Or the "sketchy" parents?A little of both?
The kid knows who Buffy and Xena are. She has seen bits of Buffy, but we don't let her watch scenes that are too violent or even too "gross" looking. For example, she can't quite handle zombies right now. So vamped out vampires might not go well. While Xena is bloody and a little sexy, it's also super campy. And I want to share them with her!
Bottom line is that I just want her to have her own Buffy and Xena to obsess over. Is that really too much to ask?
Labels: comics media parenting