Book Review:: Radicals in their Own Time by Michael Anthony Lawrence 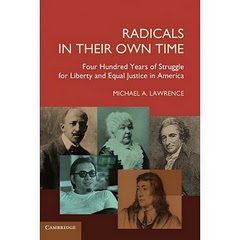 Goodness gracious is this book review late! This was one of those books lost in the shuffle of the spring semester that kicked my ass. As you might be able to tell from the cover, I was interested in Radicals in their Own Time because it included Elizabeth Cady Stanton.

I wasn't disappointed. Lawrence does a great job at tackling the controversies that surrounded ECS her whole life. From her upbringing, to how she was often too radical for her feminist friends to her decision to pursue women's suffrage in opposition to suffrage for freed slaves. I have read biographies of ECS and while all have touched on her controversies, none focused this closely on them.

Lawrence's mission was to tell the story of the United States through the eyes and lives of five radicals who helped shape US history. It is an academic book, but not academic in speak...academic in depth. Which for a big nerd like me is fine most days.

I was lucky to ask the author a few questions. Again, remember that I asked at a time when my brain was pretty fried.

1. Why focus on five individuals?
I focused on five individuals because I wanted to be able to include individuals from every part of America's four hundred year history, to create a seamless web of experience that has carried through every generation of Americans, both pre- and post-revolution. I wanted to show that every generation has them - men and women who speak truth to power in the face of sometimes overwhelming official and unofficial resistance; people who rebel against stifling orthodoxy and demand governmental tolerance and equal treatment even  when it seems they alone are waging the fight; individuals who crave freedom from arbitrary authority like the very air they breathe.

2. How did you select them as model activists?
Roger Williams, Thomas Paine, Elizabeth Cady Stanton, W.E.B. Du Bois and Vine Deloria are especially appropriate for our purposes since all are relatively lesser-celebrated figures in the American historical tableau. None are household names in the manner of a Franklin, Washington, Jefferson, Lincoln, or King. None, moreover, were aristocratic legacies to family political dynasties. Rather, they were self-made, in true American fashion, and so represent well the millions of Americans over the past four centuries who have waged, and wage still, their own battles largely in obscurity.

Part of the reason these five are less-celebrated is that each was, in a sense, too principled for his or her own good. They were controversial and impolitic. They spoke truth to power in ways irritating to authorities, and all were at times harshly critical of America. They were not approval-seeking, conflict-averse people; rather, they were agitators, and they did not shrink from offending others - not only their enemies but sometimes also their own friends - as they resolutely championed the natural rights of liberty and equal justice. There were no sacred cows for these five - including, for all, the particularly combustible topic of religious orthodoxy.

If you are a history buff and a radical in your own right, this is the book for you. Not easy breezy summer reading, but still a great read. Get yourself a copy from IndieBound or Powells.

Disclaimer: A publicist offered me a copy for review.

* Book links are affiliate links. If you buy your book here I could make a very small amount of money that goes towards this blog.
Labels: books reviews