Birth Control Blog Carnival: The Pill's Role in Radicalizing Me at 12 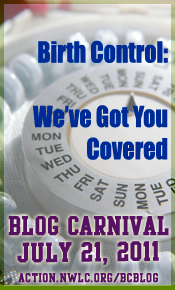 I've told part of this story before in different venues and mentioned it here as well, but let me tell it again.

I think I was about twelve when I asked my mom why we don't go to Church (my family is Catholic) and she replied to me quite simply that it was because the Pope would not let her take the pill. Now, I already knew what birth control was because my mom left her pack on plain sight. Her statement about the Pope not only jump started my critique of the Church, but also began my education on how my body, women's bodies, are "controversial" and always a topic of debate.

Summer's Eve has a new campaign out to try to shame women into "cleaning up their vaginal area" by trying to sell us on the idea that women's vaginas have been the source of history. "Over the ages and throughout the world, men have fought for it..." says the ad. While the campaign and the ad are chock full of racism, misogyny and bad taste, they are right on one thing. Throughout the ages men have fought over our vaginas...and our whole reproductive system.

Just this week the Institute of Medicine recommended that birth control should be free on all insurance plans since so many women use it at one point in their lives. NPR points to the "divisive politics of birth control" as to why it's taken this long for the government to say we should include birth control in the health care reform. Really, NPR? Birth control should be a gimme, a no brainer. But no, there are people in this country, in this world, who want to control when a woman can or cannot get pregnant.

The war for vaginas, Summer's Eve, is about control of vaginas, not some romantic fantasy you are trying to sell with your deodorizing towelettes.

Which is one reason (the other is that I take my pill as I'm about to walk out the door each morning) my almost-8yo (!!) daughter knows about birth control. She knows that some women take medicine in order not to get pregnant. I have told her since she was born (yes, I talked like this to my infant) that her body is hers. I'd rub her belly and get all squee about how all her tiny eggs are already there, just waiting. I've told her that she can have babies or not when she's older...way older. No pressure from old mom on the baby front. And yes, remind me I said that if I ever get all "But I wanna grandbaby!" on her.

It amazes me how much time women spend trying to NOT get pregnant. I've been menstruating for twenty five years and out of which, only three months have I wanted to get pregnant. I know, my eggs are efficient suckers. That means for 99% of my reproductive years, I've been avoiding the actual reproduction. And I'm sure I have another 5-10 years (maybe even more as I am Latina and all) left to go. I've been fortunate enough to be able to either pay for my pills or be supplied with "samples" over those years.

So let's hear it for birth control! GOOOOO BIRTH CONTROL! Thanks for helping me plan my family, my life and my career. Hopefully one day the kid will ask me, "Really? You actually had to pay for birth control? REALLY?!"

This post is part of the "We've Got You Covered" birth control blog carnival (#bcbc). Click over to read other posts.