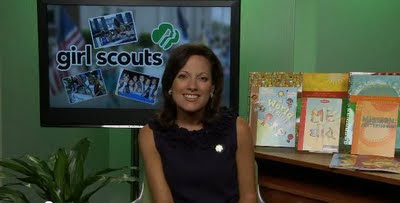 The kid is not just a smarty pants kid, but she is also pretty observant about the world. I would like to think it is due to me being honest with her about media issues and not denying her voice when she speaks up. She also has a super cool aunt who wrote a book about Reality TV and does media criticism for a living. It is quite a proud moment for me when I get to point out Photoshopping on magazine covers to her to show her that no one is that perfect. But I know I can't do it alone.

That is why I was excited to learn that the Girl Scouts has new "journeys" (what they call curriculum units) on media and story telling. I was lucky to get a chance to ask Dr. Andrea Bastiani Archibald, Developmental Psychologist at Girl Scouts of USA, about the new media units.

I asked her how we can raise girl leaders without feeding into the "good girl" stereotype. I know I catch myself talking to the kid about being a good role model or a leader, I find that what I'm really saying is "Don't act up in front of the other kids, cause they might think it's ok to act up too." This is one of the messages that was engrained in me as the oldest of three girls, not to mention from teachers who saw me as a class leader. Instead of hearing that I need to lead by positive example, I heard, don't get caught making fun of someone. Dr. Bastiani Archibald said that Girl Scouts does not want to see girls who are only smiles and polite, in fact she believes that girl-on-girl crime could be from girls feeling pressure to "be good" all the time. We need to realize that being a good role model comes from knowing one's self.

I have also found lately that the kid is taking some of the messages about being a strong girl and seeing a dichotomy: girly girl versus sporty girl. Which is hard to figure out because she is quite a girly girl not to mention awesome on the soccer field. Dr. Bastiani Archibald responded that it is quite natural for girls her age to still be thinking in absolutes. Whew! But I know I need to watch myself when I critique girly girl culture too. I am trying. Dr. Bastiani Archibald said that one way to support our girls is to support their choice of clothing. And whoooweee, is the kid's choice of clothing full of sparkles.

Dr. Bastiani Archibald told me about activities for the youngest Girl Scouts where Daisies are asked to taste-test different yogurts, some with cartoon characters on them, some without. Then the girls are asked which one they like the best. "The one with the bear on it!" is a typical response. Then it is up to the leaders to lead the girls through acknowledging that cartoons do not make yogurt take better, they just make kids want that type of yogurt more.

The kid's school doesn't start for another few weeks and I don't know when Girl Scouts start back up, but I am eager to get my hands on the Brownie journey and help our girls tell their own story.