The kid has to complete a certain number of book reports every quarter. Included in the book reports are online quizzes from BookAdventure.com. Some of the questions on the quizzes are pretty specific about plot points. Tonight the kid took a quiz based on the book, Vote!, by Eileen Christelow.

When we were first told we had to use the site, I was skeptical. But the quizzes seem fair. Tonight though, the site proved pretty awesome. Here are a few of the questions the kid was asked about Vote!
Perhaps these should be the first questions asked of GOP candidates at the next debate?

And that brings me to the awesomeness that is Vote! 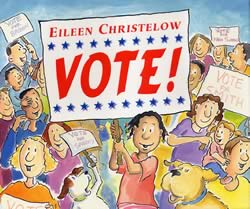 Christelow has crafted a picture book that teaches kids more about voting than I suspect most of us get in our whole K-12 education. Example? At the very end of this simple tale of an election, there is a timeline of voting rights in the USA. One of the cartoon characters, the yellow dog, remarks after a notation about the 1975 Voting Rights Act amendment, something about "1776-1975 and finally everyone can vote!" She also includes in the timeline notes about women's suffrage, the 14th amendment, ex-prisoner's voting rights and the 2002 Help America Vote Act.

I had bought the book for the kid when she was really small. It came out in 2003, so maybe when she was an infant, as we have the hard book copy. I hadn't read it to her in years and this was the first time she read it on her own...and all of it, including the supplementary material such as the timeline and definitions.

Because it is a picture book, I hadn't thought to make her reread it. But because I saw it was marked as third-grade level reading and was a 10-question quiz, I figured she could use it for her book reports. And I am so glad I did. One doesn't always read the supplementary material to an infant. Or at least she doesn't always remember that in 10 states ex-felons can't vote. But she knows that now and I saw that look in her eye that says, "Oh, hell no!" Thanks, Eileen.