Last month I took the family to the Chicago Toy and Game Fair. Sadly we only had about an hour to look around the fair. But in that short time we found a few good new games. Disclaimer: We attended using a blogger pass that I applied for and were given a swag bag of a variety of games. Any game with an asterisk (*) is one we now own thanks to the swag bag.

Pajaggle*: Imagine the classic game of Perfection, but bigger and more intense. AND if you buy more than one set of Pajaggle, you can play head-to-head...or as we did, head-to-head-to-head. Play against the clock or against a friend or family member. You can get a taste of the game via e-Pajaggle. 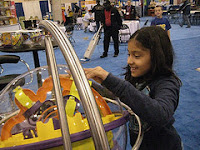 Perplexus: Oh-my-gawd this is an addictive game!

The kid got one for her birthday and we've been addicted since. So when we walked into the toy and game fair and spotted the giant sized version of Perplexus we rushed it. As you can tell from the picture, the kid loved playing with it. We had to drag her away. Hopefully Santa or the Solstice Fairy will bring us Perplexus Epic. We've been good all year! 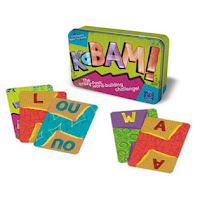 KaBAM!* is a card game that asks two players to slap down a card each and make a word with those sounds. In the image, one card has "ou" and another "L." So if you are the first to say a word that includes those two sounds, like "loud," you get the cards. And the one with the  most cards at the end wins. This ends up being a super quick game with a lot of laughing. This was certainly a big win.

There was also this awesome wooden cube puzzle that was a two player game. It was part soma cube and part something else because it was 4x4. You had to keep all the pieces within the 4x4 invisible box. I wish the guy I played against, who was a representative, had given me a card with it's name! It was one of the last things I played, then had to rush out and I couldn't find a card myself. Oh well. If anyone knows, please let me know!

There are a lot of great toys out there that are not super gendered. Now a few of the representatives did interact with the kid in a very gendered way. One greeted each girl with, "Hi there princess!" Overall, it was a great hour. I'm looking forward to it next year.
Labels: reviews