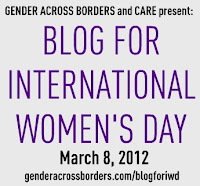 This year’s theme is “Connecting Girls, Inspiring Futures” and one of the prompts is:

How can we, as a culture and as members of the global community, involve, educate, and inspire girls in a positive way?

This is easy. Listen to girls. Make space for their voices. Educate them.

Of course in reality, it's not that easy. Too often we witness the powers that be conspire to silence girls. It is this silence that Rachel Simmons outlines in her must-read book, Odd Girl Out. When we tell or show girls that their voices are not valued, they silence their feelings, thoughts and yes, actual voices. They turn inward and all the fury they should be screaming about is pushed deep into their soul. And it hurts them.

While a part of the Nobel Women's Initiative's delegation, I lost count of how many women, young and old, happened to mention in their testimonies that at some point in their lives a parent told them that women weren't worth much. That it was no use for them to continue with their education. Some listened to that silencing and dropped out of school. A few raged on with their education. Both groups of women talked about suffering for their choice.

The women who listened felt inadequate to fight for their own rights when police or military forces assulted and/or raped them. They felt duped when multinational companies came into their communities and misrepresented their intentions when pressuring families to sell their ancestral land. Of course they overcame those feelings of inadequacy to find their inner courage to fight like hell.

The women who forged ahead with their education felt the sting of backlash. Their families turned against them. One woman talked about working up the ranks into the police force. Then being raped by her boss. Of course it was her fault for wanting a job in the first place...at least that's what the voices in her head tell her.

In Guatemala, we witnessed grandmothers admit to having been raped when their villages were attacked in the 1980s. We could see that they were courageous, but also unnerved by their own bravery. The women knew they were speaking of things they "shouldn't" be speaking about. But they were linking their decades old rapes with the violence they are witnessing today. And they do not want to see their granddaughters have to live through the same violations. Often we hear about men "finding" feminism when they become fathers, but we mustn't minimize that some women find their voices when they are now charged with raising a girl.

Instead of waiting for women to find their voice, let's raise girls to use their voices. The hardest part is not only educating girls and telling them that they have a voice, but LISTENING to their voices.