Book Review: A Little F'd Up by Julie Zeilinger 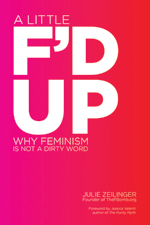 A Little F’d Up: Why Feminism Is Not a Dirty Word by Julie Zeilinger is a valiant attempt to claim the crown of “the” young feminist. While still in high school, Zeilinger launched the well-respected blog, “f-bomb.” She has certainly helped to bring feminism to a new and younger generation.

F’d Up tries to be the teen feminist guide as well as an explanation to anyone older than 25 as to what “kids these days” think of feminism and other issues. By trying to be both, Zeilinger falls short in both realms. There are places where Zeilinger does a brilliant job and others where it is clear she has bitten off more than she can handle. I read this book as a feminist scholar but will admit that part of my brain remained in “I’m the mom of a tween girl!” mode as well.

As a mom, I appreciated Zeilinger’s laying out how teens today think. Zeilinger shined when she explained how tiring it must be for teens to be constantly performing in person and online as the same time teens are just trying to figure out who the hell they are. It’s as if teens are constantly starring in their own soap opera and no one is yelling “CUT!” Her examination of hook up culture is spot on in how it both empowers girls to embrace their sexuality, but also maintains gender roles. I know it makes some older feminists heads spin...imagine being a 15-year-old trying to live through it.

Zeilinger’s honesty in calling out moms on contributing to teen girls’ body issues is important. Bonding with your daughter by going to Weight Watchers together isn’t all that healthy. I know there are moms today who struggle with how to talk about our bodies without passing on our body image issues, but also want to teach our daughters to live a healthy lifestyle.

Zeilinger also does a bang-up job at deconstructing mean girl behavior. Sadly it doesn’t end once you graduate, but if more teens listened to Zeilinger’s advice perhaps we can nip it in the bud. there are few worse things than having a mean girl coworker when you’re 40.

But where Zeilinger falters is in her grasp of feminist history and a global sense of where the broad range of feminist action is today.

When describing global women’s issues, Zeilinger stays safe by selecting four issues that are fairly non-controversial (sex trafficking, female feticide/infanticide, female genital mutilation and honor crimes). This is super smart for a book wanting to engage teens who may not call themselves feminists. But in her section on so-called honor killings she disappoints. Zeilinger fails to mention activists like Rana Husseini who has been documenting and fighting for harsher penalties for the murder of young women in Jordan. For Zeilinger to state that women in these countries are paralyzed with fear ignores the important work that is currently being done. It erases their work and can not be excused by her inexperience.

It is also disappointing to read Zeilinger’s belief that feminism as it is today is about promoting women as “flawless (p 131)” or wanting “more power” than men. I can only chalk up her passion for men to join the movement and her inability to see decades of women (outside of separatists) trying to bring more men in as a result of her inexperience. While the husbands and male partners of women feminists are not always at the rallies or in leadership positions, their support of feminism is what allows some of us to “do it all.” We also need to recognize the work of men like Michael Kimmel and the men of Men Against Sexual Violence chapters around the country.Yes, we need more feminist men working on feminist issues, but we do have a few great ones.

Zeilinger’s weakness in how to deal with racism and white privilege within feminist history and today’s activists should fade in time. Her attempt to tackle it is equally brave and lacking. In her own statement on white privilege Zeilinger states:


“I think it's really shitty that I'm not able to do a better job of writing about this element of feminism (being a privileged white girl) better. And I don't want to cop out, bbut if somebody out there thinks they can do better: You should. We need it. (p 84).”

Many already have. While not exactly privileged white girl responses and also not perfect scholars have have been working on white privilege for years and they are worth directing teens towards. Get teens to look inside their backpack!

The struggle white suffragists found themselves in post-Civil War was glossed over. It is not a pretty or easy conversation, but it's one best had as soon as possible. There’s a lot we, as a movement, still need to learn from how Elizabeth Cady Stanton and Frederick Douglass went from allies to being pitted against each other, not to mention their respective communities. As evidence that we haven’t learned from that moment we just need to peek back at the 2008 Democratic primary and how Black women were told to “choose sides.” It's difficult to acknowledge the racism and classism that went into the suffrage movements tactics and thoughts, but we must or we can't truly move forward. For me I'm still working on negotiating that space. Zeilinger will surely figure out where she stands in that space.

Much of F’d Up is a great introduction for teens to feminism. Zeilinger would had been well served to have had a co-author who could guide on feminist history/theory or more hands on editors. I have no idea if the swearing is truly representative of Zeilinger’s voice or an attempt (by the author and/or editors) to pander to teens. Either way, it should had been toned down because reading “bad ass” a zillion times was fucking annoying. (See?)

F’d Up has great points, but it also has a lot of flaws. I can’t recommend it as a whole, but I would certainly recommend her section on teens living life online (especially in light of Facebook trying to figure out how to get tweens on board). I look forward to Zeilinger’s future work. She has a passion that will carry her far. As a blogger, I believe that her growth as a feminist leader will be very public and hopefully that will ensure a new generation of feminists will follow her.

On the other hand, yes I'm conflicted about this book, if Zeilinger is the voice of the next generation of feminism, F'd Up is a must read because it's important for those of us older than 25 to know how they view feminism, how we have been dealing with issues and how important it is to have women's history taught in high school.

To get a copy for yourself, head over to Powells or Indiebooks.

Disclaimer:  I was asked to review this book and was happy to oblige, even if it turned out to be one of the hardest reviews to write.

* Book links are affiliate links. If you buy your book here I could make a very small amount of money that goes towards this blog by helping me purchase books for school. Thanks!
Labels: books feminism reviews