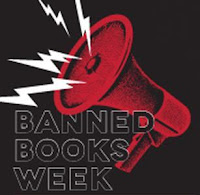 Viva la Feminista is located at the intersection of feminism and motherhood so it should be a given that we read banned books. And guess what, it's banned book week!

Since I'm too busy reading non-banned books about organizational theory and building three literature reviews, I'm going to suggest you mosey on over to The Feminist Texican Reads for her review of ¡Ban This! The BSP Anthology of Xican@ Literature.

You can also head over to Open Road Media's Banned Books Week shin dig, which includes a fun interactive infographic on banned books. Click on a title and gives you the info on why it was banned.

According to Banned Books Week, the 10 most challenged titles of 2011 were:
Which have you read? Which is your favorite?