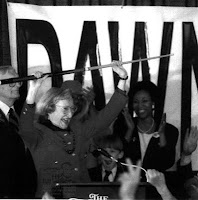 The grand dame of Illinois politics has died. Dawn Clark Netsch was 86. I had the honor of meeting her on several occasions, usually at fundraisers and luncheons, and each time I would introduce myself to her, she was always gracious. Sometimes I wouldn't say anything, just stand back and watch her as she greeted fans, old friends in her friendly way. For me, she still has one of the best political ads ever -- the straight shooter. Sadly, I couldn't find it in a quick YouTube search, so let me describe it. When she ran for Governor of Illinois in 1994, she ended an ad with her playing pool and making a great shot while someone said "Dawn Clark Netsch, a straight shooter." You can see her holding a cue stick in the photo as she claimed victory after the Democratic primary.  Somehow I'm sure the ad will find its way to the internets today.

I did find that the Chicago History Museum has a 9-part oral history series on her.

She was an inspiration and while I didn't know her personally, I feel a great loss today. Especially as I am headed to a fancy luncheon where a lot of Chicago's power women will be in attendance. It's an event where the chances would had been high Dawn would have appeared. In a state filled with politicians who have broken so many promises and fallen from their pedestals, Dawn would always get a standing ovation anytime she was pointed out in a crowd.

Thanks, Dawn Clark Netsch. May we all serve as graciously as you did.
Labels: illinois politics women