Does President Obama have to say "abortion" for him to support abortion rights? 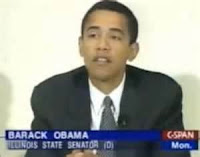 There's a lot of chatter about how President Obama addressed, in person, a Planned Parenthood conference. In my opinion he gave a fab speech, filled with all the things I would want him to say. The first time I met the President he was still an Illinois State Senator and it was at a Planned Parenthood lobby day. He bought us lunch. He took the time to come say hi and thank us for our work. Honestly, I can't remember if he said the word "abortion" or not. But he was there. For me, that says a lot.

But to some the fact he did not say the word "abortion" last week was a disappointment. What say you?

BTW - The Illinois Planned Parenthood Gala is coming up soon.