"The Ugly Truth" About the Sex Trade

Hollywood has sanitized sex work by romanticizing it, as in "Pretty Woman," to a point that many people will wave off criticism of people who pay for sex by claiming that women "choose" to do it. While the feminist debate over sex work continues, there is no debate that much is wrong with the sex trade. An organization, End Demand Illinois has launched a campaign with these outdoor signs: 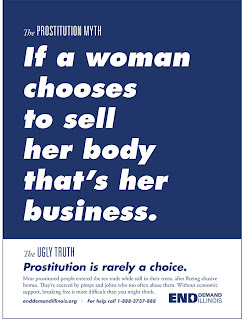 "The Ugly Truth" is a multi-media advertising campaign that seeks to raise awareness of the harm inflicted on women who are trafficked or prostituted, while calling the public to clear and measurable action on their behalf. Created through a dialogue with our partners at the Chicago Alliance Against Sexual Exploitation (CAASE), who are currently working to pass critical anti-sexual exploitation legislation in Springfield.

Lynne Johnson, leader of End Demand Illinois and a colleague in the Chicago feminist scene, wrote an eloquent op-ed about ending the policy to charge those in prostitution with a felony:

It’s time to call it off. A 13-year-old experiment of charging prostitution as a felony in Illinois has failed. People in prostitution are being cycled through the criminal justice system without access to the help they really need, and the people causing the harm are going unpunished.

I'm looking forward to seeing all of the signs around the city. And hopefully having some constructive conversations with people who may have never thought of how to address the sex trade in Illinois.
Labels: actions feminism