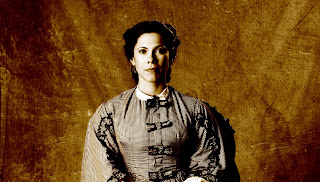 Loreta Velazquez was no normal little girl. Even as the young daughter of Cuban aristocrats, she railed against the injustice of being a girl in a world that privileged boys. Her story is told in "Rebel," a new episode of "Voces" on PBS, premiering Friday, May 24th.

Velazquez was sent to New Orleans as a child to live with an aunt, who was supposed to "finish" turning Velazquez into a proper young lady. Alas, love had a different plan.

How this headstrong Cuban woman went from eloping with a Texan Army officer to becoming a Confederate soldier, then a spy for the Union is filled with tragedy and yearning. Velazquez fulfills her dream of following in the steps of her idol, Joan of Arc, but quickly realizes how unglamorous war actually is.

What is known of Velazquez we know from her 1876 memoir A Woman in Battle. She published it a few years after the Civil War ends and it is scandalous! So scandalous that the book is quickly labeled a hoax. Some who do admit that Velazquez was in the Army, accuse her of being a prostitute.

Velazquez is literally erased from history because her memoir challenges the view of Southern men, the valor of war and the real reason that the Civil War was fought. Her narrative does not fit the official view of the Civil War, on either side.

Her story is fascinating, but the controversy over her memoir is equally amazing.

After viewing "Rebel," you will be left pondering how history is written, what we know, and why. Which is exactly what writer and director Maria Agui Carter wants us to do.

Velazquez's book is still in print and can be purchased from Powells or Indiebooks.

Disclaimer: Latino Public Broadcasting provided me with a preview DVD of the episode. Book links are affiliate links and if you purchase a book, I might make enough money for a soy chai latte.
Labels: gender history latina reviews TV