The Student Loan Crisis May Bust Us for Good

When I graduated college in 1997, I walked away with just over $10,000 in student loan debt. It seemed insurmountable back then. It would seem like pocket change today.

Today, student loans are impacting a generation of young people like nothing else. 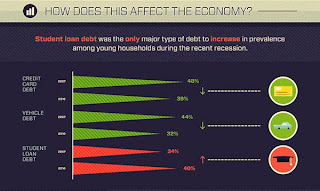 Democracy for America has created this great infographic to show us exactly what is at stake when it comes to the student loan crisis. Besides the marketplace reasons to get student loan debt under control, I am seriously worried about the number of people putting off starting a family.

I am also worried about what this crisis is doing to young women's earning and savings power. Due to the wage gap, women end up paying MORE of their newly earned income compared to the men they graduated with:


A woman with a B.A. in psychology and social work without a graduate degree brings in a median of $40,000 annually, compared to a man with the same credentials, who makes $52,000. Take-home pay can vary by state, but if this woman is single and childless and lives in Minnesota, for example, monthly income comes to roughly $2,600, versus around $3,200 for the man, which means a $300 monthly payment will take a much bigger bite out of that woman's paycheck. [link]

So what can we do about it? Senator Elizabeth Warren has a bill that will address this crisis. It won't solve it, but it will help. Click over to DFA and become a citizen co-sponsor...essentially, tell her you support her bill.

Banking on Education infographic via Democracy for America