Review: "Let Them Wear Towels" a film by #NineforIX 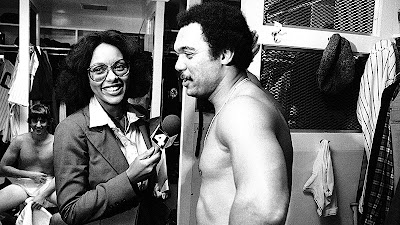 This week's installment of espnW's Nine for IX documentary series is, "Let Them Wear Towels," the story of a small group of pioneering women sports reporters who dared to enter the locker room.

How bad was it when women decided they too wanted to report on the goings on in sports? My childhood hero, Dave Kingman once threw buckets of water on Jane Gross and cussed her out. Hey, I wasn't even four when he came to Chicago to play for my Cubbies, so I forgive myself. Then there was a time when a hockey player lifted & escorted out another woman reporter.

The old boys club was still located in the locker room, so most men in sports did what they could to maintain that power differential.

Consider what a sports reporter has to accomplish in their daily reports and you can see where the power struggle fits in. If a player blows a save in the ninth inning (something us Cubs fans are far too familiar with), you have to ask what happened. And that asking usually happens in the locker room.

In "Let Them Wear Towels," we hear tale after tale of women trying to just do their job, but being told to stand in the hallway. Sometimes the team's press person would bring a player to the door for an interview. Other times, she would send her questions with a sympathetic male reporter. Melissa  Ludtke outlines how difficult it was for her to do her job without being in the locker room. Often guys would get to her in the hallway exhausted and would apologize, then go home.

Some felt it was easier for women to ask questions of the sport as they did not have to appear as if they knew it all, as men needed to do.They also felt they changed the way questions were asked. Instead of just asking, "What happened when you threw that curve ball that went for a homerun?" the women would ask, "How did you feel when you gave up the winning home run?"

Despite the hostility that these women faced, they did have some strong allies. Tommy John was fine with women reporters and even helped to gain one reporter access to the locker room but once Major League Baseball's commissioner heard about it, he rescinded permission. He claimed he needed to get permission from players' wives.*EPIC EYE ROLL*

Claire Smith had a super-ally in Steve Garvey. Once he came out into the hall and stayed there as long as she needed. But that's not all. He filed a grievance with team as to how they treated her. Garvey saw it as an issue as to how they communicate to baseball fans. Smith was his conduit to the fans, so why exclude her from doing that?

The women sports journalists quickly learned that access is not enough. Once inside, women were harassed. They mostly assumed that access would result in respect for the job and for them.

I highly recommend this for everyone to see. The battles fought were huge and done on an individual basis. It is also a huge testament to the need to engage men in feminist issues.