Just a quick note to point out two pieces that I wrote for other sites that perhaps you missed...

1) I interviewed US Secretary of Health & Human Services Kathleen Sebelius while she was in town for Blogher '13: 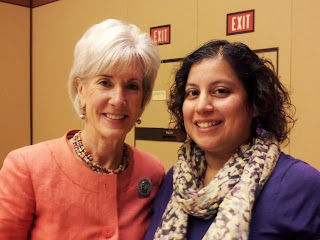 The state and cost of health care in the USA is why the Affordable Care Act is an important piece of legislation. I am unsure if the cost of health care will go down under Obamacare (I hear it won’t), but we do know that everyone will be mandated to have insurance. This, hopefully, should put health care in the affordable category for most of us. But will it help minimize health disparities in the US? This is what I asked Secretary of Health and Human Services Kathleen Sebelius.


To read the rest, visit The Broad Side.

2) Latina Lista asked me to write a short summary of the MALCS 2013 Summer Institute that I attended and presented at: 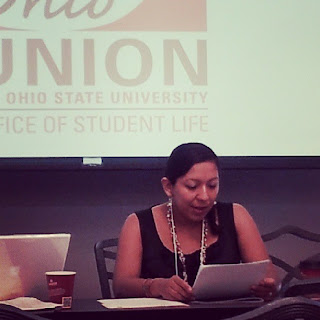 Columbus, Ohio is not the first place you would guess for an academic gathering focused on Chicana/Latina and Native American women studies with a feminist heart. But last week it was!

The MALCS 2013 Summer Institute is an annual gathering of Chicana and Native American scholars. This was my first time attending. I have failed to attend in the past mostly because I have not felt that my academic work had focused on Latinas enough. But after learning that MALCS also had a STEM (science, technology, engineering and mathematics) track, I knew I needed to go to present my work and hopefully learn from other attendees.

Within the STEM track, there were presentations on the low number of Chicanas/Latinas in STEM at all levels, from undergraduate students to faculty members.

Jean Rockford Aguilar-Valedz, PhD, used Gloria Anzalduan’s writing to frame her solution of the decolonizing science education. “Why are the advances that the Incas, Aztecs and Mayans made not discussed in the same manner as European civilizations?” I could not help but hear Edward James Olmos as Jaime Escalante saying, “You burros have math in your blood!”