As we approach January 1st, the Tribune reminds us of new laws such as a statewide ban on tanning beds for those under 18, increased penalties for using social media to organize "flash mob attacks" and that sex education must include discussion of birth control (schools can still opt to not teach sex ed at all). But the new law I am excited to see is a law that better restricts rapists parental rights:

On January 1, 2014, IL Public Act 098-0476 becomes effective. This new law has many added benefits to victims of sexual abuse who give birth to a child conceived of that abuse. Public Act 098-0476 amends 750 ILCS 45/6.5 by broadening the restrictions to include “men who father through sexual assault or sexual abuse” rather than only “sex offenders.” This important amendment means that victims no longer have to have to wait for a conviction of their attacker, which may never come, in order to terminate parental rights of a rapist. To protect against false accusations in cases where there is no conviction, there is new language that provides for a fact-finding hearing to be held to establish if a person “is found by clear and convincing evidence to have committed an act of non-consensual sexual penetration or his conduct in fathering that child.”

Additional aspects of the new law allow mothers or guardians to deny maintenance or support from the father. The father is no longer allowed to inherit from the child without the mother’s or guardian’s consent. Further, notwithstanding the Illinois Marriage and Dissolution of Marriage Act, no other family member (parent, grandparent, great grandparent, or sibling of the father) will have standing to request custody or visitation with the child without the mother or guardian’s consent. The final addition in the law details how a child’s mother or guardian may file a petition as an affirmative defense in any proceeding regarding the child initiated by the sexual offender. 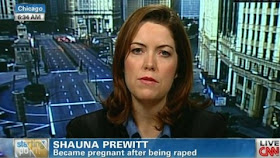 During the discussion about Todd Akin's "legitimate rape" comment, the issue of rapists having parental rights bubbled up. Shauna Prewitt, a Chicago lawyer, was the most visible voice around the issue. Now on January 1st, women who have survived and recovered from a rape and made the decision to carry their pregnancy to term will have more power to ensure that she is no longer tethered to her rapist.

I really hope that other states use our law as a model. I hope that anti-choice legislators around the country rally around it. I'm sure that when deciding to carry a pregnancy conceived by rape, weighing whether or not you want to see your rapist on a regular basis or allow them to be alone with your child, goes into that decision.

Shauna...Thank you for your courage and outrage.