Review: In Your Eyes by Joss Whedon 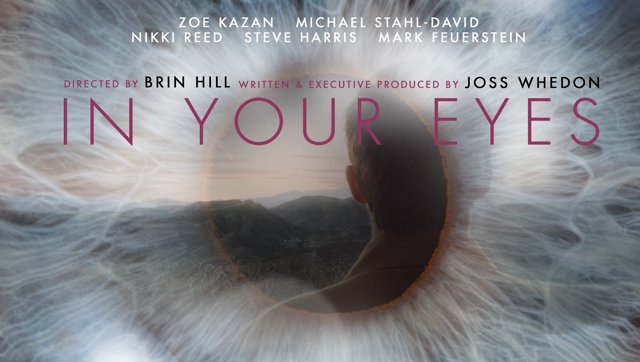 Really, Joss? You drop a movie on us on a Monday morning? What was wrong with Saturday night for us old married fans? But I did it, I watched your fabulous, adorable and magical movie.


______________________
For those who haven't seen my frantic posts on Facebook & Twitter today, Joss Whedon, the genius behind "Buffy the Vampire Slayer" released his latest film on Vimeo. For a mere $5 (less than a tub of popcorn), you can rent the film for 48 hours. So don't rent until you are ready to curl up on the couch or hunker down in your cubical to watch 105 minutes of romance on adrenaline.

"In Your Eyes" is Joss' take on the classic boy-meets-girl-as-she-plows-into-a-tree story. Don't worry, I won't reveal anything that isn't in the trailer - which is actually the first few minutes of the film. I won't lie, it's an intense film, but it also will make me laugh out loud (so really be quiet at work!). Through some type of magical force, Rebecca and Dylan are connected across the country in a manner no one would ever believe.

Storywise, it is lovely and unpredictable. It is also heart wrenching. The star-crossed pair is separated by many obstacles. You will smile a lot as you fall in love with the characters.

The story is also fairly universal, which is why it was disappointing to see Joss lead another project with two very pretty white actors in the lead. While Joss stretches himself into the world of a chick flick, he remains stuck in the casting pool. There is no reason this could not have featured a Latino man in the lead as Dylan is from New Mexico. I'll accept the fact that New Hampshire might be the perfect setting for a pixie doe-eyed woman lead. A lot of pixels have been spilled on Joss and his race issues in his previous projects. The cast of "Agents of S.H.I.E.L.D" is a great step in the right direction, but he still has a way to go.

And that's where I am in my romance with Joss himself. I fall deeply in love with what he creates, while also thinking, "Come on, you could have cast America Ferrera!" I can't wait to discuss this at the Joss Whedon celebration at DePaul in a few weeks!

That is why I am giving this film 4 our of 5 stars. As soon as the kid is in bed, I want to rewatch it with my husband. If you enjoy a little magic with your romance, I highly recommend you fork over $5 to see this too.
Labels: movies reviews