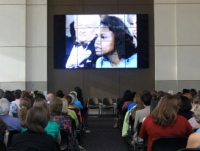 VLF welcomes Lauren Miller's guest post about a recent viewing of "Anita: Speaking Truth to Power."Lauren is a Chicago-based womanist impassioned about all things related to holistic wellness for marginalized women. As Engagement Coordinator at Women Employed, she energizes young professional women online, and offline, to promote practices and policies that support real change for America’s working women.


“I was raised to do what is right. And can now explain to my students, first hand, that despite the high cost which may be involved, it is worth having the truth emerge,” asserts Anita Hill in 1991 to a crowd of familiar faces in Oklahoma. 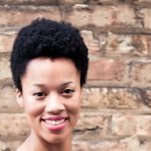 This moment, and the power of those words, were experienced yet again to a sold-out crowd of professionally diverse women of all ages during an event hosted by Women Employed on August 5th. The eyes of Chicagoland’s foremost women lawyers, political leaders, and advocates of Women Employed were transfixed on the screen displaying one of Chicago’s only screenings of Anita: Speaking Truth to Power. The film highlights the important narrative from twenty-three years ago when one woman’s raw testimony, broadcast in the international spotlight, emboldened millions of women to tell the truth and ushered in major changes in sexual harassment policy and female representation in politics. Anita Hill's 1991 testimony before the Senate judiciary committee, in which she accused Supreme Court nominee Clarence Thomas of sexual harassment, sent shock waves through every office in America and brought the important issue into the open.

This new documentary, directed by Academy-award winning filmmaker Freida Mock, illuminates the disgrace of America’s political leaders’ inability to authentically listen to and engage with sexual harassment. An experience now more widely acknowledged within our contemporary moment, progressive women have always recognized sexual harassment as stitched in the very fabric of what it means to exist as a woman in a patriarchal society. From cat calls and street harassment to the prevalent male gaze and more strange, graphic, and lewd sexual violence, we’re no strangers to sexual harassment. Sure, we can examine the statistics, but talking directly with our mothers, sisters, and girlfriends provides more visceral stories that empower many of us to speak out and act.

However, as Anita: Speaking Truth to Power reminds us, the truth is not easily digested by those unwilling to engage with it—those socialized firmly within a patriarchy that promises, among other things, to allow an otherwise rightfully deserving man to continue toward the prize he has earned. When Anita spoke out, many questioned, “Why could she not simply keep her mouth shut like she had done for so many years?”. One patronizing query from a member of the judiciary committee was, “Why in God’s name” would you ever speak to him again, Anita? This is wounding to listen to.

As Hill reflects in the film, twenty-two years after the hearings, “[t]he more I understood about sexual harassment, the more I understood that it was only part of the problem. Sexual harassment is just part of a larger issue of gender inequality.” Blaming the victim is an archaic sexist remedy with “dealing” with sexual harassment —putting a band-aid over a festering, infected wound that hasn’t been treated or even looked at truthfully and with compassion. If every woman were to not speak to or engage with her perpetrator, society would indeed look dramatically different—it would be far more quiet.

And, their silence would do what, exactly? It would neither create healing nor effectively “shame” the perpetrator into feminist, equitable actions—a responsibility that is not just on women, and shouldn’t be.

What Hill encourages us to do with these words is examine the larger issue. Her story invites us to interrogate gender inequality and the particular nuances of being both female and black. In the film, years later, reflecting on the sensationalized trial, Anita mentions that “[i]t was really the combination of my race and my gender and it changed the dynamics.”

In the face of a decisive and divisive panel of all white, all male political leaders, Anita remained steadfast. She spoke the opening words of this blog post within days of her testimony against then-Supreme Court justice nominee Clarence Thomas. As she speaks them, the calm yet strong Anita appears extraordinarily self-assured—something notable for a woman who faced, head on, the politics of Washington and all of the messy, and messed-up, dynamics related to being both woman and black. That Thomas was already hand-picked by George Bush, Sr. to be the next conservative Supreme Court justice and that, for that administration, he would also be the justice of color, albeit token, mattered. That Thomas recognized the elephant (read: blackness) in the post-Civil Rights era room and, after Hill’s detailed testimony with several witnesses who spoke additional truth to power, intentionally chose to victimize himself as casualty of “high-tech lynching for uppity blacks” mattered. Thomas understood the weight of that statement in planting fear in the minds of the panel who would rather avoid “racist” label in the early ‘90s. That the panel of deciders was all white and all male matters. All of this matters.

And what matters for us–what we must keep in perspective about this story’s relevance for us today—is that this story illuminates institutionalized dynamics of race, power, sex, and control in the United States. It’s dangerously easy for us to look at this narrative in isolation. It’s easy for us to demonize a man, especially a black man, for being hypersexual, degrading, and violent towards a woman. Yes, what Thomas did is unequivocally horrendous. That being said, it’s harder for us to critique everything surrounding this story: the nearly missed opportunity and near-refusal for a hearing; the sheer lack of preparedness of our politicians when listening to Hill’s experiences; the way that Hill quickly became the one “on trial;” the endemic nature of sexual harassment for a patriarchal society, and therefore the obvious nature of all that occurred within the hearings. That this turned into a spectacle is both disturbing and shameful, but it ultimately illuminated the prevalence of sexual harassment and racial and gender tensions within our nation’s very fabric.
Labels: guestpost work